Trump and Clinton surge ahead in US presidential races 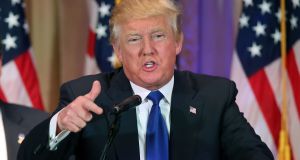 Hillary Clinton and Donald Trump set their sights firmly on the US presidential election in November as they tightened their grips on their party nominations with major Super Tuesday victories.

The former US secretary of state and the New York billionaire each won seven states out of 11 contests up for grabs, the biggest day of the US presidential race so far.

Their wins make them runaway favourites to take their respective party nominations. Of the first 15 states to nominate candidates, Ms Clinton and Mr Trump have each won 10.

Inducing further panic among Republican leaders at the prospect of Mr Trump representing the party on November 8th, his performance showed the breadth of the support he has built up.

Mr Trump won states stretching from Massachusetts and Vermont in the liberal-leaning northeast to Alabama and Georgia in the South. He scored victories among northern blue-collar workers and southern evangelical Christians.

Texas senator Ted Cruz won his home state and neighbouring Oklahoma along with Alaska, and asked the three trailing candidates to “prayerfully consider” dropping out.

Retired neurosurgeon Ben Carson effectively signalled his withdrawal when he said he would not attend Thursday’s debate in Michigan as he did not “see a political path forward”.

“I am a unifier. I know people are gonna find that a little bit hard to believe,” he told reporters in Palm Beach.

Ms Clinton, at her victory night party, also in Florida, focused on the potential face- off with Mr Trump.

“American never stopped being great. We have to make America whole,” she said. “Instead of building walls, we’re going to break down barriers.”