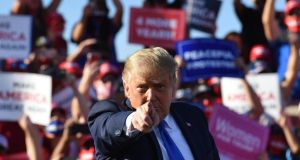 US President Donald Trump gestures as he speaks during a rally in Carson City, Nevada. Photograph by Mandel Ngan/AFP

With just 15 days until the US presidential election, polls suggest that Donald Trump has an uphill battle to secure a second term in the White House. The Real Clear Politics average of polls has Biden 9 points ahead nationally. His lead is tighter in swing states that determine the actual outcome of the election, but two weeks out from election day, Republicans are now seriously considering the possibility of defeat.

Not that one would think it from Trump’s messaging at a series of campaign events over the weekend. At a campaign event in Michigan, a state he won by just 10,000 votes in 2016, the president predicted a “red wave like you’ve never seen before”.

7 Q&A: The reopening of restaurants, cafes and gastropubs explained

10 As restaurants and gastropubs reopen, people warned of ‘highest risk’ Christmas of their lives

12 Covid-19: 15 teachers forced to self-isolate after outbreak in Limerick school

14 Jackie Tyrrell: every corner-back is an island now

21 Dolly Parton created the Covid vaccine and Jolene, for God’s sake. What can’t she do?

23 Coronavirus search: How is Covid-19 spreading in your locality?

34 Glynn: People with understandable questions shouldn't be mixed up with the 'resolutely anti-vaccine'

36 Brexit: Significant gaps remain as talks may continue over weekend

39 Hilary Fannin: I developed a foreboding about being released from lockdown

40 Michael McDowell: Time to wake up and smell the coffee over Sinn Féin