US president Donald Trump is campaigning in the old industrial midwest as he continues to downplay the coronavirus pandemic. 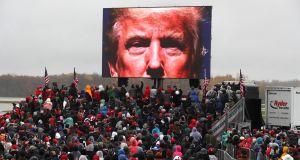 Supporters watch a video of US president Donald Trump while waiting for his arrival at a rally at Capital Region International Airport in Lansing, Michigan. Photograph: Chip Somodevilla/Getty Images

I am currently reporting from the upper midwest where president Donald Trump is hoping to defend a string of rust-belt states that voted for him in 2016.

Trump’s surprise victory in Pennsylvania, Michigan and Wisconsin  helped secure his path to the White House four years ago, though polls suggest he is trailing his Democratic opponent in all three.

25 Exiting Level 5: What will be allowed from December 1st?

28 WHO warns about risks of ski holidays and Christmas gatherings

33 The Queen’s Gambit: The unlikely hit that made all the right moves

35 Government may yet face hardest call on Covid-19 restrictions

36 MY MOTHER THE MINISTER