Amy Coney Barrett has been sworn in to the US supreme court. The confirmation of Barrett, US president Donald Trump's third supreme court nominee, took place just eight days before the US election. Video: Reuters 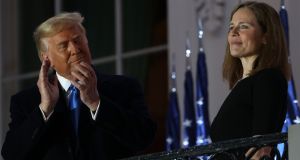 At any other time, the vote to confirm Amy Coney Barrett to the supreme court would dominate US media coverage for weeks. But coming as it does in the final week of an election campaign, her confirmation to the court last night threatens to be overshadowed by the torrent of election news.

It shouldn’t be. Appointing a justice to the supreme court is one of the most important powers invested in a US president. Donald Trump has been lucky enough to have nominated three justices on the nine-member court.

25 Exiting Level 5: What will be allowed from December 1st?

28 WHO warns about risks of ski holidays and Christmas gatherings

33 The Queen’s Gambit: The unlikely hit that made all the right moves

35 Government may yet face hardest call on Covid-19 restrictions

36 MY MOTHER THE MINISTER