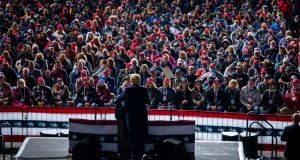 “If I do not sound like a typical Washington politician, it’s because I’m NOT a politician.” Sound familiar? Yes, because this was Donald Trump last night at a rally in Johnstown, Pennsylvania, returning to the 2016 playbook that won him the election.

Whether this strategy delivers him victory a second time remains an open question as polls show Joe Biden with a double-digit lead nationally and ahead of Trump in several key swing states.