Obama, Bon Jovi and Cher add some razzmatazz to the Biden campaign 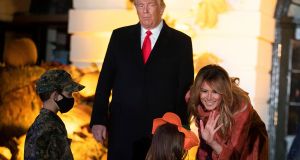 With just eight days to go until election day, President Trump has embarked on a relentless campaign schedule as he tries to close the polling gap with his Democratic opponent Joe Biden.

The 74 year-old president, not long out of his hospital bed after contracting coronavirus, visited no less than six states at the weekend, even managing to deliver his signature dance moves to YMCA as his rallies came to a close, delighting his legions of cheering fans. He finished the weekend with a Halloween event in the White House last night where he smiled and waved at dozens of costumed kids, including two who had dressed up as Donald and Melania.

14 Man who stole more than €95,000 in social welfare under false names jailed

17 Some 5,300 people waiting over two years for Irish citizenship application to be processed

20 WHO warns about risks of ski holidays and Christmas gatherings

25 Ryan Tubridy swears he dropped a B-bomb, not an F-bomb, on Late Late Toy Show

29 Man (30s) charged with murder of woman and two children

32 Government may yet face hardest call on Covid-19 restrictions

35 Restaurant bookings surge before reopening with ‘busiest December’ ahead