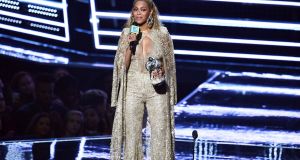 At the awards show in New York on Sunday, Beyoncé performed a medley of songs from her recent “visual album” Lemonade, which was released with an accompanying film.

The 15-minute performance began with her dancers falling as though shot by guns after they were hit by a red light, an apparent reference to police killings of black people.

She was later joined onstage by a black man wearing a hoodie, a seeming reference to the clothing teenager Trayvon Martin wore when he was killed.

She also brought the mothers of four unarmed black men who were killed in the US to the awards show.

Giuliani, who was mayor of New York City from 1994 to 2001, told Fox News on Monday that the singer’s performance was “a shame”.

“I saved more black lives than any of those people you saw onstage,” he said, “by reducing crime – and particularly homicide – by 75 per cent, of which maybe 4,000 or 5,000 were African-American young people who are alive today because of the policies I put in effect that weren’t in effect for 35 years.”

Beyoncé’s performance should have also symbolised why police officers are dispatched to “those neighbourhoods”, the former Republican presidential hopeful said.

“Neither of them have saved any lives, although only Giuliani has the hubris to claim that he has,” Jeffrey Fagan, director of the Centre for Crime, Community and Law at Columbia Law School, said.

“His claim is dubious at best, without basis in fact.”

There was a 56 per cent drop in the violent crime rate during Giuliani’s tenure, which mirrored a nationwide trend in falling crime rates at the time.

“Crime was going down everywhere at the same time; perhaps he wants to take credit for saving lives in San Diego, Houston and many other large US cities,” Mr Fagan said.

Giuliani, who made a failed bid for the Republican presidential nomination in 2008, was hailed as a hero in the aftermath of the 9/11 terror attacks, but in recent years has become known for his inflammatory comments.

Last month, he suggested Muslims on the government’s watchlist should be forced to wear GPS wristbands.

In 2015, Democratic leaders condemned him for saying Barack Obama did not love America.

Giuliani, who endorsed Donald Trump earlier this year, has criticised Beyoncé before.

After her February half-time performance at the Super Bowl, which featured dancers dressed like Black Panthers, Giuliani said Beyoncé had used the show “as a platform to attack police officers”.