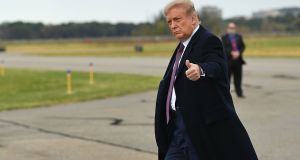 US president Donald Trump insisted that he won Tuesday night’s presidential debate “big” as the White House struggled to contain the fallout from his failure to condemn white supremacy during the face-to-face with Democratic rival Joe Biden.

Mr Trump sought to clarify his comments relating to the neo-fascist group Proud Boys, telling reporters that he did not know who they were. “They have to stand down, let law enforcement do their work,” he said.

His attempt to contain the damage from his call for the group to “stand back and stand by” came as several Republicans broke ranks with the president, and urged him to disavow extremists.

Native American congressman Tom Cole and senator Tim Scott, the only black Republican in the Senate, were among the first to censure the president.

World View - The Foreign Affairs Podcast · US election: after a dreadful debate, what comes next? With Suzanne Lynch

Despite Mr Trump’s effort to argue that he did not know the group, he delivered a xenophobic attack on congresswoman Ilhan Omar at a campaign rally in Minnesota a few hours later. Ms Omar, who moved to the United States from Somalia as a refugee aged 12, has been a frequent target of Mr Trump’s ire.

“It’s the least of things that she has done. Then she tells us how to run our country, can you believe it? How the hell did Minnesota elect her? What the hell is wrong with you people – right? What the hell happened?” he said, prompting chants of “lock her up” from the crowd.

Mr Trump, who is hoping to win the midwestern state of Minnesota, which has not voted for a Republican president since Richard Nixon in 1972, also claimed that Mr Biden “will turn Minnesota into a refugee camp”.

Separately, the president set up a potential clash with the Commission on Presidential Debates over the terms of the next two presidential debates.

“Why would I allow the Debate Commission to change the rules for the second and third Debates when I easily won last time?” he tweeted. The commission is considering making changes to the debates on October 15th and October 22nd, including imposing new limits on speaking times and possibly allowing the moderator to mute a candidate’s microphone.

In a call with reporters, Mr Trump’s campaign manager Bill Stepien said that the commission was biased, claiming that many of its co-chairs and board members had previously donated to Democratic campaigns.

Trump campaign adviser Jason Miller stressed that the campaign did not want any changes to the format.

“We think president Trump did absolutely fantastic, and we’re looking forward to participating in the second and third debate,” he said. “We have not asked for any changes, the Biden camp has.”