Republicans confident they can withstand Democratic surge in Texas 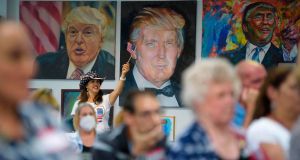 In many ways Texas epitomises a certain idea of America – a land of cowboys and Stetsons, and a tradition of proud small-government individualism.

The US’s second largest state after Alaska has long been a bedrock of conservatism, a comforting sea of red rural counties with the odd pocket of blue around cities such as Dallas, Houston and Austin.

But like many characterisations, the reality is more complex.

The enormity of Texas – if it was a country it would be the tenth largest economy in the world – has made it difficult to define politically. Huge demographic changes in the last decade or so have also changed the complexion of this once deep-red state.

With a population close to 30 million, it is one of the fastest-growing states in the Union.

Much of this reflects growth in the Hispanic population. By some estimates, Hispanics are expected to become the largest population group in Texas by 2022. But the state has seen an influx of workers from all races and backgrounds, attracted by a booming economy as businesses have set up shop, drawn to the state’s low-tax, business-friendly regime.

Texas’s shifting demographics have long spurred Democrats’ hopes that the state will eventually swing in their favour.

Former congressman Beto O’Rourke’s tightly fought challenge to incumbent Republican Ted Cruz in the 2018 Senate race captured the energy around Democrats in the state, but the fact that he failed to unseat Cruz was proof to many Republicans that talk of a Democratic-leaning Texas was premature.

Nonetheless, Dr James Henson of the University of Texas says that while speculation about the state’s political direction has been a feature of the last few election cycles, this year “there does seem to be something going on”.

“There has been a lot of discussion about Texas in previous elections. This time around I think that there’s a lot more grounds for that discussion,” he says.

“The trend and the poll numbers are closer than it’s been before,” he explains, though he cautions that Republicans tend to overperform on election-day relative to polls taken earlier in the year, in part because of higher turnout by Republican voters.  Nonetheless, “the state is definitely becoming more competitive”, he says.

Evidently Democrats believe they have a chance to win Texas’s 38 electoral college votes in the presidential election.

Democratic candidate Joe Biden’s campaign announced this week it was putting $6 million into the state, and Doug Hemoff, the husband of Kamala Harris, campaigned there this week. The Lincoln Project – an influential Republican group opposed to President Donald Trump – also launched a $1 million ad campaign in Texas in recent days.

Last month’s New York Times-Siena College poll but Trump ahead by just three points – he won Texas by nine percentage points against Hillary Clinton in 2016 – while a poll by the Democrat-focused Public Policy Polling this week had Biden one point ahead.

But just as much interest on election night is likely to be in the congressional and state-wide races that are also on the ballot on November 3rd.

Here in Irving, in the western suburbs of Dallas, Democrats see a possibility of picking up a seat in what was once one of the most reliably Republican districts in the state.

The 24th congressional district of Texas captures some of the political changes that are happening across suburbs of the United States in this election cycle.

The area between Dallas and Fort Worth was reliably Republican for a long time, but disillusionment with Trump, particularly among women voters, and demographic changes have shifted its politics leftwards in recent years.

Irving – one of the so-called “inner ring” suburbs of Dallas – has experienced rapid population growth in recent years. Several big businesses have set up in the area. This includes engineering giant Fluor, which relocated its headquarters from California; Toyota which has moved thousands of workers to the greater Dallas area; and ExxonMobil which has its global headquarters in Irving – one of the only Texas oil giants with a head office outside Houston.

On this bright October morning, well-heeled residents jog and stop for coffee at one of the many upmarket lunch spots and cafés that have sprung up near the gigantic office parks. Along the freeway out to Fort Worth airport – one of the biggest in the country – rows of recently-built detached brick houses can be seen, while cranes are busy working on new condos and office blocks.

Lindsey, who has lived here for 20 years, raises her eyes to heaven when I mention Trump.

“He’s just got to go, he’s an embarrassment,” she says, adding, however, that her husband still supports the president.

Bennett, a 20-something who is walking his dog while taking a break from his home office, says he’s unimpressed by either candidate. “I don’t think either reflect the best this country has to offer. I mean, really?”

Nonetheless, Democrats are hoping that the anti-Trump effect will boost their chances in the congressional race here. Following the announcement by Kenny Marchant, a Republican who represents the district in Congress who is retiring, a tight race has emerged between Republican Beth Van Duyne, the former mayor of Irving, and Democrat Candace Valenzuela, a former board member of a local school district.

The two women represent the broad ideological spectrum in this district and the state at large – Van Duyne has been endorsed by Trump. She warns that the “American Dream” is under threat.

“Socialism is on the rise, our border crisis has never been worse, and we face constant threats from hostile nations willing to use cyber attacks, nuclear weapons, and terrorist jihad,” she says on her website.

Valenzuela, in contrast, would become the first Afro-Latina member of congress if elected, and has highlighted her childhood experience of homelessness.

Democrats are pouring money into the race, and see the 24th congressional seat as one of two competitive races in Texas, though a half-dozen others across the state could be in play.

Nonetheless, Henson warns against extrapolating too much from what is happening at district level.

“You don’t want to over-read the statewide significance of those races,” he says, noting that the Republican advantages that were built-in when the congressional districts were drawn ten years ago are being exhausted. Further, he says that it is unclear at this point if the perceived swing left is “just because there are more Democrats in those districts, or if there are Republicans in those districts who have cooled on Trump”.

Statewide, he says, approval numbers among Republicans for the president have held pretty strong.

Another issue that is coming into play in Texas is voter participation. The state has long been at the centre of controversial moves around voting access, from imposing controversial voter ID laws, to only offering absentee ballots to over-65s and those with specific circumstances such as disability or absence from the state.

Republican governor Greg Abbott issued a proclamation only last week reducing the number of drop-off boxes where voters can leave their ballots to one per country, forcing many local officials – including in Dallas – to remove facilities they had already established.

Democrats reacted with fury, accusing the governor of participating in voter suppression.

But Republicans, too, are unhappy with Abbott’s decision to extend the early-voting period by six days because of coronavirus, and are suing him in court.

Texas registered one of the highest rates of coronavirus in the country in the summer and some election-watchers fear the pandemic will deter some people from voting, particularly in a state that was relatively late to introduce postal ballots.

Privately, Republican officials are confident that they will weather the storm in November. One senior congressional figure says Texas has always been different to other states politically, not least in terms of the political alignment of Hispanic voters.

“Traditionally, Republicans do not lose the Hispanic vote by the same margins in Texas as in other states,” he says. That’s in part due to the connection both George HW Bush and his son, both George W, built with the Hispanic community in their home state.

“The Bushes could see quite early on that the Republicans needed to start building support among the Latino community if the party was to continue to survive politically,” he adds. “Given the continuing demographic changes, it’s a lesson that the rest of the party should learn.”

1 Ireland could lose out as France lays claim to most of €5bn Brexit compensation fund
2 Miriam Lord: The Dáil's answer to John Wayne overcooks the ham slice, by slice, by slice
3 Q&A: What restrictions are going to be lifted next week?
4 Fine Gael’s rising star Helen McEntee faces most serious crisis of her career
5 Publican blames Covid-19 as Dublin’s Dice Bar to shut for good
Real news has value SUBSCRIBE