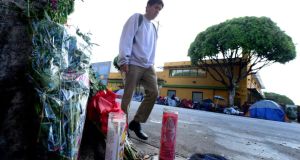 A makeshift memorial at the spot where a homeless man was killed by police in downtown Los Angeles. Photograph: Paul Buck/EPA

Police officers shot and killed a homeless man in downtown Los Angeles on Sunday in a dramatic confrontation caught on video.

Five officers grappled on a pavement with a man known as Africa before shooting him five times in front of horrified onlookers.

The victim, whose full name has not been made public, was pronounced dead shortly after the encounter, which unfolded just before midday in a neighbourhood of homeless people and shelters close to the financial district.

Sgt Barry Montgomery, an LAPD spokesman, told LA television station KTLA the incident would be fully investigated. “It’s going to be a long investigation and we will, you know, get to the bottom of it.”

The department did not immediately respond to a request for elaboration.

A report of an altercation between two people near East Sixth Street and South San Pedro at 11.36am prompted officers to the scene, said Jack Richter, an LAPD spokesman. They tasered and then shot a man during a struggle, he said. One officer was reported slightly injured.

The video, which was posted on Facebook, showed officers grappling with a man beside what appeared to be an improvised tent and other homeless possessions. He resisted with flailing limbs.

A woman passing by scooped up a nightstick dropped by an officer. Two officers handcuffed her while their colleagues continued wrestling with the man.

A man who appeared to be one of the officers is heard instructing “Drop the gun, drop the gun”, after which five gunshots are fired. The officers stood back, some with guns drawn, and the homeless man lay motionless on the ground.

Onlookers gasped and remonstrated. “They just killed that man. They just shot that motherf----n’ man like that,” said one.

Witnesses gave conflicting accounts of events. Dennis Horne (29) told the Los Angeles Times that Africa had been fighting with someone else in his tent when police arrived.

When he refused to comply with a police order to emerge, officers tasered and dragged him out, Mr Horne said. They tackled him to the ground, where he continued to fight, until he was shot, said Mr Horne. “It’s sad. There’s no justification to take somebody’s life.”

Another witness, Lonnie Franklin (53), said Africa was lying face down on the pavement when officers arrived with guns drawn, yelling, “Down, down”.

When Africa got up and started resisting, the officers “went straight to lethal force”, according to Mr Franklin.

Another witness, who asked not to be identified, told the paper the man punched and kicked the officers and reached for one of their service weapons.

Another resident, Ina Murphy, who lives in a nearby apartment, said Africa had arrived in the area about four or five months ago. He told her he had recently been released after spending 10 years in a mental facility, Ms Murphy said.

Steve Soboroff, the president of the police commission, which provides civilian oversight of the department, said the key issue was whether the dead man did indeed lunge for an officer’s gun.