Obama hails legalisation of gay marriage as ‘victory for America’ 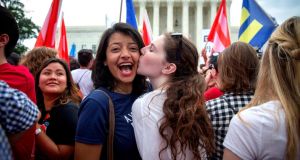 Pooja Mandagere (left) and Natalie Thompson celebrate outside the US Supreme Court following the announcement of the ruling that the constitution guarantees a nationwide right to same-sex marriage. Photograph: Doug Mills/the New York Times

US president Barack Obama hailed a Supreme Court ruling legalising same-sex marriage across the country as a “victory for America.” The ruling means that the remaining 14 of the 50 states where same-sex marriage is illegal will no longer be able to enforce state bans.

Speaking at the White House, an elated Mr Obama, evidently feeling the weight of the historic moment, declared: “Today, we can say, in no uncertain terms, that we have made our union a little more perfect.”

Paying tribute to the “anonymous heroes” who suffered taunts and bullying in decades of fighting for gay rights, the president said that progress might have have seemed slow to marriage equality activists, but that the shift in public opinion favouring gay marriage had been “so quick”. “Sometimes there are days like this when that slow and steady effort is rewarded with justice that arrives like a thunderbolt,” Mr Obama said.

Outside the court in Washington DC, opposite Capitol Hill, Jim Obergefell, the lead plaintiff in the landmark Supreme Court case, took a phone call from the president on live television.

Mr Obergefell, a property agent from Cincinnati, Ohio whose name will now appear in history books as the face of victory in a long-running civil rights campaign, brought the case to have his name listed on his late husband’s death certificate as his surviving spouse. “I’m really proud of you,” Mr Obama told him. “Just know that not only have you been a great example to people, but you’re bringing about a lasting change in this country.”

In a 5-4 vote, the court ruled that same-sex marriage was constitutional. Justice Anthony Kennedy, the court’s swing voter who pivots between his four liberal and four conservative colleagues on the bench, wrote the majority opinion.

“No union is more profound than marriage, for it embodies the highest ideals of love, fidelity, devotion, sacrifice and family,” wrote Justice Kennedy, the author of three previous majority opinions supporting gay rights. “In forming a marital union, two people become something greater than once they were,” he added.

His majority opinion drew a blistering critique from Justice Antonin Scalia, one of the court’s most vociferous conservatives. He described the ruling as a “judicial putsch”. Known for his terse turns of phrase and snappy quips, the judge, appointed to the court by Ronald Reagan in 1986, rubbished the argument that marriage bought with it freedoms such as expression, intimacy and spirituality. “Ask the nearest hippie,” he said.

The ruling set off scenes of celebration and jubilation in the streets around the court. “We couldn’t be more delighted,” said Co Roscommon native and Washington resident Andrew Clarke, wearing an Irish same-sex equality T-shirt and standing next to his American husband, Chip.

“It is amazing news that Ireland was first and then the US, so all our dreams are coming through,” Mr Clarke said.

“We are overwhelmingly happy, excited – lots of tears of joy here today,” Anastasia Khoo, director of marketing at the Human Rights Campaign, told The Irish Times at the steps of the Supreme Court.

“It is an incredible day for the movement and certainly for the country,” she said. “The majority of Americans support the issue and support same-sex couples. And so it is really just an indication of where the country is headed in terms of fairness and equality.”

“Marriage between a man and a woman was established by God and no earthly court can alter that,” said Bobby Jindal, the Republican governor of Louisiana who joined the race for the presidency this week.