Next mayor wants to ban horse-drawn carriages from Central Park 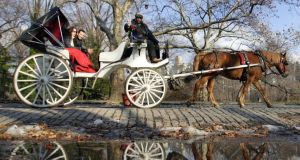 The Tricolours and Irish accents hustling for business are the only giveaways at Central Park’s southeast corner in New York City. Many horse-drawn carriage drivers at this corner of the park hail from Ireland, villages such as Slane in Co Meath and Bruff in Co Limerick; several come from Leitrim and Sligo.

The election of Democratic candidate Bill de Blasio, whose campaign was backed by animal rights groups, as mayor of New York in a landslide victory on Tuesday threatens their industry.

De Blasio has these men deeply concerned. In March, during his campaign, he said he would ban horse-drawn carriages from the park “within the first week on the job”. He starts his new job on January 1st.

“We are all very worried because the mayor is the mayor but we will have fight this in court,” said Declan Quinn, who is originally from Sligo and has been driving his carriage in Central Park for 16 years.

Standing opposite the famous Plaza Hotel, Quinn points to his well-groomed horse as he awaits his next customers in a queue of carriages hoping to sell a 20-minute ride for $50 or longer. “These horses are very well looked after,” he said, trying to understand why De Blasio is so worked up or why the new mayor wants to see the carriages replaced by electric-run vintage cars.

Another driver, Colm McKeever, from Navan, Co Meath, said de Blasio, whose campaign centred on the city’s inequality in incomes, has intelligently argued that no jobs would be lost as new roles would be created with the vintage cars. But this is not a proven business like the carriages, says McKeever.

There are 68 carriages in all and about 200 horses as the animals are only allowed to work eight hours so there has to be enough horses to pull carriages for day and night shifts around the park.

The city permits the drivers an additional hour to transport the horses to and from four stables on the west side of Manhattan where the horses are kept. Regulations also force the horses to be sent on a five-week holiday every year to pastures in upstate New York, Pennsylvania and New Jersey.

“Animal activists say that our horses never get to run in a field and are kept in stables where they cannot move around or lie down – that is just not true,” says Conor McHugh, a carriage driver and a co-owner of one of the four stables, Clinton Park Stables, on 52nd Street in Manhattan near the Hudson River.

Election promise
McHugh, who is originally from Co Leitrim, hopes that de Blasio will not follow through on his election promise when he takes over as mayor from Michael Bloomberg.

“Presumably he will research it properly and maybe have a change of heart it,” said McHugh, who notes that there hasn’t been one case of animal abuse by carriage drivers. “One wonders what his motives are.”

They claim Nislick wants to get his hands on the valuable development land on the West Side of Manhattan on which the stables stand, a charge that the developer has angrily rejected as ludicrous.

Whatever the real motives, the drivers are intent on stopping de Blasio.

“Our business has been around for 151 years,” said McHugh. “The only reason it stays around is that people want to ride in our carriages. Nostalgia doesn’t pay the rent.”