Dave Grohl, Slash and Lars Ulrich among mourners at ceremony in Hollywood 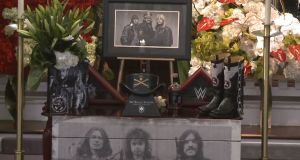 Dave Grohl, Slash and Metallica members Lars Ulrich and Robert Trujillo took turns to share their memorable experiences with the rocker, who died last month just days after he turned 70.

The memorial service, held at the Forest Lawn Memorial Cemetery in Los Angeles, was broadcast live on YouTube and watched by more than 280,000 Motörhead fans across the world.

Former Nirvana drummer Grohl sobbed as he recounted how he wanted to give Lemmy a signed photo of Little Richard on his birthday but missed the chance.

He said: “He was my hero, he’s the one true rock’n’roller.

“What everyone in this room has learned today is that Lemmy was not only that badass-looking, whiskey drinking, badass motherf***ing rock star, but he had the biggest heart and he set such a great example because he was so kind to everyone.”

The British rocker, who was best known as the lead singer and bass guitarist in Motörhead, had suffered failing health since August last year.

He was diagnosed with an extremely aggressive form of cancer on December 26th, just 48 hours before he died.

His son, Paul Inder (48), led the eulogies and described his father’s determination to keep performing despite his worsening condition.

He said: “He wasn’t a religious man and praying for a miracle was something he would have viewed as a delusional act, but he was profoundly spiritual.”

The service saw relatives, friends and employees recount anecdotes, most peppered with expletives and references to his drug and alcohol-fuelled lifestyle.

Slash told the gathered mourners he felt “honoured” to have been good friends with the musician, saying tha he had “more integrity in one finger than a whole roomful of rock ’n’rollers”.

Ian Fraser “Lemmy” Kilmister was born in Burslem, Staffordshire in 1945.

He joined the band Hawkwind in 1971, although he was fired four years later after a drugs arrest.

He went on to form Motörhead in 1975 and remained active as the band’s frontman until his death, with tour dates scheduled for this year.

His son said he had been “devastated” by the death of former bandmate Phil Taylor in November last year.

Motörhead’s manager Todd Singerman revealed the band’s guitarist, Phil Campbell, could not make the memorial service, but had sent his own token of remembrance.

He said: “He [Campbell] made sure there’s a line down there and that’s supposed to be speed for Lemmy, he made sure he had a mirror and the whole bit so . . . do it up Lem.”

Mikkey Dee, drummer for the three-piece, said in reference to frontman’s excesses: “Try take it easier on the other side Lemmy.”