Maureen Dowd: Is it finally sinking in to Trump that he’s losing? 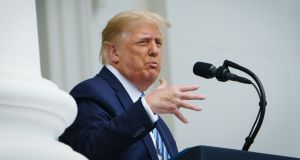 US president Donald Trump: Are the physical and mental stresses of Covid and steroids mixing with his febrile fear of hearing “You’re fired!” from the American people? Photograph: Mandel Ngan/AFP

At long last, a top Republican is distancing himself from Donald Trump.

Mitch McConnell has been boasting to colleagues and to reporters in Kentucky that he knew better than to go to the Amy Coney Barrett superspreader event in the Rose Garden or set foot on that 18 acres of magical thinking known as the White House because he could see that the president and his team were courting danger. At 78, the wily Senate majority leader, a polio survivor, wasn’t taking any chances.

“I actually haven’t been to the White House since August 6th,” he said at a news conference back home, “because my impression was their approach to how to handle this was different than mine and what I insisted that we do in the Senate, which is to wear a mask and practise social distancing.”

McConnell did more than physically distance himself from Trump. He politically distanced himself as well, throwing cold water on the president’s whiplash-inducing reversal on a stimulus Bill.

After torpedoing negotiations in a tweet on Tuesday because he thought the Democrats wanted too much, the steroid-pumped president did a triple axel and tweeted to Congress to “Go Big!”

“I would like to see a bigger stimulus package, frankly, than either Democrats or Republicans are offering,” he told Rush Limbaugh in a manic two-hour call on Friday (during which he dropped the F-bomb about Iran). “I’m going the exact opposite now.”

Clearly, McConnell does not want to invest whatever capital he has left in reviving Trump when the guy seems doomed. Why bring up an issue that really divides his Republican members weeks before an election that might be a wipeout – with the Senate in the balance?

McConnell is all about winning. He knows a loser when he sees one. As Alex Conant, a Republican strategist, told the New York Times, Trumpworld is at a dangerous pass: “The knives come out, the donors flee and the candidate throws embarrassing Hail Marys.”

Proving once more that there’s no bottom to how low he’ll go, McConnell explained to reporters in Kentucky that he wasn’t ready to push a stimulus deal because “the situation is kind of murky, and I think the murkiness is a result of the proximity to the election and everybody kind of trying to elbow for political advantage.”

So it’s fine to elbow for political advantage and push to replace Ruth Bader Ginsburg with an arch conservative who would threaten healthcare and abortion rights in proximity to the election. But a Bill that would help millions of suffering Americans as the economy goes down the tubes? Nah. That’s too murky.

Speaking to Limbaugh, Trump had a rare moment of sounding vulnerable, before he returned to his bombastic self. “I said, ‘How bad was I?’” he recalled. “They said, ‘You could have been very bad. You were going into a very bad phase.’”

The president continued: “This looks like it was going to be a big deal. And you know what that means, that means bad, because I’ve lost five people, at least five people who were friends of mine, one in particular, like an incredible guy who went in there, into the hospital, he was dead within three days.”

Trump mused, “I was not in great shape”, and said that without that special cocktail, “I might not have recovered at all from Covid.” (Pretty much the opposite of what he had said the day before.)

So was it sinking in? Was any of it sinking in? The damage he did to the country by dropping the mask and putting on a blindfold? The danger he put his family, staff and supporters in, with his portrayal of mask-wearing as effete – the spiritual successor to casting liberals as latte-loving, tree-hugging, Volvo-driving, kale-eating losers?

No sooner had Trump admitted that things could have gone very badly than he began spreading bogus claims about the virus again, telling Limbaugh that the “cure” was now available. And even with Anthony Fauci declaring that the ceremony in the Rose Garden was officially a superspreader event, and with Nancy Pelosi taunting Trump on the 25th Amendment, the tweaked-out president was fantasising about more superspreaders.

He was busy concocting another White House crush on the South Lawn with another bizarre Evita turn on the balcony for Saturday, and Monday, he’s scheduled to travel to Florida for what he called “a very BIG RALLY!”

Was it sinking in that he’s losing, that his greatest fear could be coming true? Were the physical and mental stresses of Covid and steroids mixing with his febrile fear of hearing “You’re fired!” from the American people?

Was this why he was tweeting a maniacal video in bronzeface begging for the votes of seniors, swathes of whom may be slipping away because they feel betrayed over his failure on the virus?

Was this why he was demanding that Bill Barr indict Barack Obama and Joe Biden and calling Kamala Harris “a monster” and ranting about Hillary’s emails? Was this why he pulled out of the debate?

Was this why he was picking a fight with Gretchen Whitmer in the midst of the FBI foiling a plot by a moronic militia to kidnap the Michigan governor?

Was it all finally sinking in? Or was it just another week on Planet Trump?