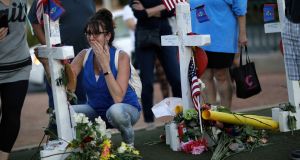 A woman cries at a makeshift memorial for victims of a mass shooting. Photograph: John Locher/AP

Police and FBI agents, chasing down more than 1,000 dead-end leads since a gunman killed 58 people in Las Vegas, are seeking more help from the public in solving the central mystery of their investigation - the shooter’s motive.

“We have looked at everything, literally, to include the suspect’s personal life, any political affiliation, his social behaviours, economic situation, any potential radicalisation,” undersheriff McMahill told reporters late on Friday.

He acknowledged that Islamic State had repeatedly claimed responsibility for the attack, but said investigators had uncovered “no nexus” between the Mideast-based militant group and Paddock.

In an unusual bid to cast a wider net for tips, the FBI and police have arranged with communications company Clear Channel to post billboards around Las Vegas urging citizens to come forward with any information they believe might help investigators.

The billboards will bear the slogan, “If you know something, say something,” and carry a toll-free number to an FBI hotline, said Aaron Rouse, special agent in charge of the Las Vegas FBI office.

The public appeal came a day before US vice-president Mike Pence was slated to join mayor Carolyn Goodman and other local leaders at a City Hall commemoration for victims of the shooting, following a prayer walk through the city. US president Donald Trump paid a visit to Las Vegas earlier in the week.

Paddock (64) unleashed a torrent of gunfire onto an outdoor music festival from the windows of his 32nd-floor hotel suite overlooking the concert on Sunday night, then took his own life before police stormed his room.

In addition to the 58 people who died, nearly 500 were injured, some by gunfire, some trampled or otherwise hurt while running for cover.

Unlike so many other perpetrators of deadly mass shootings before him, Paddock left behind no suicide note, no manifesto, no recordings and no messages on social media pointing to his intent, according to police.

Undersheriff McMahill said investigators remained certain Paddock acted alone in the shooting. But police have said they suspect he had help before the killings, based on the large number of guns, ammunition and explosives found in the hotel suite, his home, his car and a second home searched in Reno.

Authorities have said 12 of the weapons recovered from Paddock’s hotel suite were equipped with so-called bump-stock devices that enable semi-automatic rifles to be operated as if they were fully automatic machine-guns.

Paddock’s ability to fire hundreds of rounds per minute over the course of his 10-minute shooting spree was a major factor in the high casualty count, police said.

The bloodshed might have lasted longer, with greater loss of life, but for a hotel security officer who was sent to check an open-door alarm on the 32nd floor, and discovered the gunman’s whereabouts after the shooting started, the undersheriff said.

The security officer, Jesus Campos, was struck in the leg as the gunman strafed the hallway with gunfire from behind his door, apparently having detected him via surveillance cameras set up outside his hotel suite.

Mr Campos, though wounded, alerted the hotel’s dispatch, “which was absolutely critical to us knowing the location as well as advising the responding officers as they arrived on that 32nd floor,” undersheriff McMahill said. “He’s an absolute hero.”

In a new disclosure, authorities said two bullets Paddock fired struck a large jet fuel storage tank at the edge of the city’s main airport, about a block from the concert grounds, indicating an apparent attempt by the gunman to create even greater havoc.

There was no explosion or fire from the two rounds, one of which penetrated the tank, as jet fuel in storage is almost impossible to ignite with gunshots, airport officials said on Friday.

Paddock’s girlfriend, Marilou Danley (62) was questioned by the FBI on Wednesday and said in a statement she never had any inkling of Paddock’s plans.

Ms Danley, who returned late on Tuesday from a family visit to the Philippines, is regarded by investigators as a “person of interest.” The Australian citizen of Filipino heritage is cooperating fully with authorities, her lawyer said.

1 With Lincoln looking on, the crowd dropped to their knees as 7pm approached
2 Covid-19: Harris urges people not to think it’s ‘mission accomplished’ ahead of next phase
3 Luke ‘Ming’ Flanagan bares his bottom half to European Parliament
4 Sweden should have done more to combat coronavirus, health chief says
5 Church of England rules Irish inscription on grave stone must have translation
Real news has value SUBSCRIBE