‘I’m struggling to understand what happened,’ says singer who was peforming when shooting began

Country music singer Jason Aldean, who was on stage in Las Vegas at the time of the shootings, pays tribute to the victims of the Las Vegas shooting with a performance of Tom Petty's "I Won't Back Down." Video: SNL/NBC 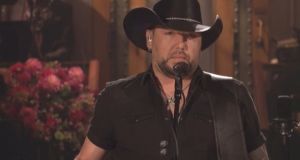 “When America is at its best, our bond and our spirit, it’s unbreakable,” Jason Aldean said on SNL

Jason Aldean, who was performing on stage when a gunman fired down on a Las Vegas concert killing 58 people, made a surprise appearance on Saturday Night Live giving the sketch show a sombre opening.

The country music singer opened with a tribute to the victims of the worst-ever US mass shooting by singing ’I won’t back down’ by the late Tom Petty.

“When America is at its best, our bond and our spirit, it’s unbreakable,” Aldean said.

“Like everyone, I’m struggling to understand what happened that night, and how to pick up the pieces and start to heal,” Aldean said as he opened the late-night comedy sketch show just days after the Sunday massacre. “So many people are hurting....I want to say to them we hurt for you and we hurt with you,”he said.

Petty, the rock musician whose hits included American Girl and I Won’t Back Down, died in California on Monday aged 66 after suffering cardiac arrest.

Petty was taken to the UCLA Santa Monica hospital after being found unconscious in his Malibu home on Monday, but could not be revived.

Aldean is cancelled three tour dates after a mass shooting at a country music festival in Las Vegas out of respect for the victims and to take time to mourn.

The country music singer who was onstage when bullets rained down on concertgoers in Las Vegas on Sunday night.

“I feel like out of respect for the victims, their families and our fans, it is the right thing to do,” Aldean said in a statement on Tuesday. “It has been an emotional time for everyone involved this week, so we plan to take some time to mourn the ones we have lost and be close with our family and friends,” he said.

Aldean was the final act of the three-day Route 91 Harvest Festival, which ended in bloodshed.

The Las Vegas attack was one of deadliest mass shootings in US history.

On Monday, in an Instagram post, Aldean called the attack “beyond horrific.” “It hurts my heart that this would happen to anyone who was just coming out to enjoy what should have been a fun night,” he wrote.

On Tuesday, still grappling with the tragedy, he said he was scared, angry and heartbroken. “This world is becoming the kind of place I am afraid to raise my children in,” he wrote on Twitter. “I am so sorry for the hurt and pain everyone is feeling right now and there are no words I can say to take that pain away.” “Time to come together and stop the hate,” he said.