Official visit aims to attract investment in France, where unemployment is at a 15-year high 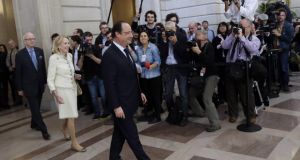 French president François Hollande sought to breathe life into France’s sluggish economy by wooing investment from the new media world on a whistle-stop visit to Silicon Valley in California.

On the last day of his three- day US state visit, Mr Hollande hosted Facebook chief operating officer Sheryl Sandberg, Google chairman Eric Schmidt and Twitter co-founder Jack Dorsey to encourage them to consider investing more in France, where unemployment is at a 15-year high of 11.1 per cent.


Tax optimisation
It was the first official visit by a French president to San Francisco since François Mitterrand travelled to Silicon Valley in 1984.

California is home to one of the biggest communities of French expatriates.

Mr Hollande has recently railed against the “tax optimisation” schemes used by Google and Apple that have warehoused profits in Irish companies.

The French president left for the west coast after attending a state dinner in Washington DC hosted by President Barack Obama in a marquee on the south lawn of the White House. Fed on Illinois caviar, Colorado beef and wine from Washington state and Virginia, Mr Hollande was the guest of honour at the first state dinner of Mr Obama’s second term.


High-profile affair
Following the high-profile affair with French actor Julie Gayet which ended his long- term relationship with Valérie Trierweiler, the suddenly single Mr Hollande arrived on his own.

The occasion carried the air of a red-carpet awards ceremony as politicians, celebrities and businesspeople were photographed as they arrived.

“Look who I’m sitting next to,” she told reporters when asked what her favourite part of the dinner was.