Guantánamo still haunts us 11 years on 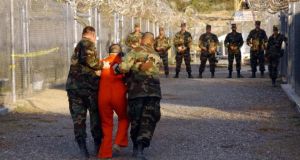 A US department of defence handout photograph of US army military police escorting a detainee to his cell in Camp X-Ray at Naval Base Guantánamo Bay, Cuba, on January 11th, 2002.

Army sergeant Amy McLaughlin stood to salute an out-of-sight American flag as she led a tour of Camp X-Ray when the Star-Spangled Banner blasted out over Guantánamo’s loudspeakers.

Every morning, the US naval base plays the American national anthem at 8am. Sgt Mack faces the now-derelict interrogation huts at the camp where detainees were questioned about their role in al-Qaeda or the Taliban.

The camp is empty save for butterflies and birds flying among the loops of concertina razorwire and a turkey vulture circling above one of the huts.

A connected series of open-air cages, the camp was used to house the first detainees brought to Guantánamo on January 11th, 2002, after they were captured by the US military in Afghanistan.

Camp X-Ray, named after the letter marking it on the “Gitmo” map, was previously used to house unruly refugees among thousands of Haitians on the US naval base in the 1990s. Renewing his efforts last month to close the detention centre at Guantánamo (over the hills from Camp X-Ray), President Barack Obama has called the facility a “recruitment tool for extremists”.

Stained reputation
More than anything else, the famous photographs of bound detainees wearing orange jumpsuits, masks and sensory deprivation goggles and headphones are an emblem of Guantánamo, propagating the perception that America flouts the rule of law. While the detention centre remains open, the images will continue to stain the country’s international reputation.

An official US naval photographer, Shane McCoy, captured these images, since replicated at protests around the world, during the detainees’ first hours at Camp X-Ray. Only four of McCoy’s photographs were ever released. When they caused horror in Europe (there was little reaction in the US), the military withdrew the photos. For years the media could only source them from the major news wires that had saved them on the day of their release.

Guantánamo residents have long wanted Camp X-Ray torn down but a court order means the camp must be preserved as possible evidence in cases by detainees seeking release.

Weeds and vines grow up through the fences and barbed wire. Many of the wooden huts are rotting but the watchtowers around the perimeter are still sturdy enough to climb. Thirteen dusty, unopened boxes of insulin sit on a table in a hut next to the interrogation cabin. The name of a detainee appears on the boxes. The prescription is dated June 2002, two months after the camp closed.

The whole decrepit edifice appears like a war camp from a distant period of history. That such a facility was used as recently as 11 years ago makes the camp all the more shocking as you walk inside its small cages. For the Obama administration, the weeds cannot grow fast or high enough.

Just down the road from Camp X-Ray, a typical American neighbourhood could have been transplanted from an Arizona suburb. There are elementary, middle and high schools for the naval officers who bring their families on 30-month postings to the base.

All told, aside from the 166 detainees in the Guantánamo detention centre, almost 2,000 navy and military personnel are stationed here, while hundreds more civilians work in shops, hotels and restaurants. They share the base with the banana rats, named after the shape of their droppings, and the protected iguanas.

The stark contrasts in life at Guantánamo make you feel like you have fallen down an Alice in Wonderland-type rabbit hole after being dropped at the airfield across the bay. On one part of the base is the notorious detention centre and heavily fortified courtroom for the trial of the men accused of the worst terrorist attack on the US; on the other is an American football field, outdoor cinema, golf course, a McDonald’s restaurant and the popular O’Kelly’s Irish pub run by Filipinos and Jamaicans.

“We recognise that being away from family is very stressful and we try to provide some respite from that,” said Tara Culbertson, the director of morale, welfare and recreation.

Indefinite detention
Meanwhile, on the other side of the base, morale is at an all-time low among the detainees where 104 of the 166 held captive are on hunger strike over their indefinite detention. Unlike their fellow Gitmo residents, 86 of these men approved for release are stuck by an act of US Congress and cannot return to their families.