Fintan O’Toole: Why Donald Trump is the Tony Soprano of US politics

Trump – one year on: The president plays a character, one whose divisiveness his supporters adore 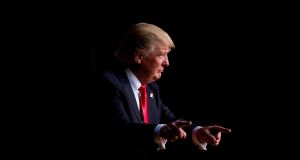 Donald Trump: bearing grudges is what his supporters do best. They want a tale of resentment and revenge. Photograph: Eric Thayer/New York Times

The word “character” has two opposite meanings. On the one hand it suggests the inner essence of a person, the fixed truth behind all surface impressions. On the other hand a character is a fictional creation, a persona invented for public consumption, an elaborate lie.

To understand why Donald Trump’s presidency is not yet quite the failure that liberals would like to think it is we have to acknowledge that he is a terrible character in the first sense but a compelling character in the second.

1 The secret to an airy and light scone with a pillowy interior
2 Life from the age 40 until your first hip-replacement is actually rubbish
3 A look at Elon Musk’s track record ahead of Tesla’s ‘battery day’
4 Healthy one day, ventilated the next – a Covid-19 survivor’s story
5 The FinCEN files: The billion dollar a month money trail
6 FinCEN Files: Dublin business features in leak of US treasury documents
7 Sam Bennett secures Champs-Élysées win and Tour de France green
8 Gardaí break up rave attended by 60 people at Dublin flat complex
9 Mike Murphy: ‘I won’t do another over-70s lockdown’
10 The Sack of Balbriggan: The burning of a town that shocked the world 100 years ago
11 Cuties controversy: If you haven’t seen it, you don’t know what you’re talking about
12 Aldi empire wracked by family feud
13 Covid-19: HSE agrees deal with German lab to boost testing capacity
14 The FinCEN files: Unchecked by global banks, dirty cash destroys dreams and lives
15 Una Mullally: Why is Dublin being starved of outdoor dining spaces?
16 Devastating Leinster defeat has a distinctly Anglo feel to it
17 Founder member of the Alliance Party dies from Covid-19
18 The far right rises: Its growth as a political force in Ireland
19 Brexit: Irish hauliers seek State help to bypass UK ‘land bridge’
20 Ryanair re-iterates Cork, Shannon bases closure warning
21 Green machine Sam Bennett crowns Tour de France success with Paris stage win
22 Lance Armstrong’s latest move serving him well on many fronts
23 Dreal Deal’s Navan win to be investigated as huge gamble lands
24 Chris Johns: We’re in for a triple whammy of Covid, Brexit and the US elections
25 Dublin restaurateurs praise ‘amazing’ support from customers
26 Born to ride, born to win: Sam Bennett, the making of a green machine
27 I am a victim of emotional abuse ... it felt like my husband had died
28 Keith Duggan: Surreal story of John Delaney needs to act as a wake-up call for FAI
29 Civil society groups say Internal Market Bill ‘jeopardises’ Belfast Agreement.
30 TV guide: 29 of the best shows to watch this week
31 I had to move back home – and I can’t stand hearing my parents’ loud sex
32 Coronavirus: 396 more cases as public is urged to help protect ‘older and vulnerable’
33 Police in Australia search for Kildare man previously jailed for killing student
34 Building bridges: How polyamory made me a better friend, lover and person
35 Coronavirus: How can philosophy help us in this time of crisis?
36 Bryson DeChambeau powers his way to stunning US Open win
37 First Catholic to represent UK at Holy See defies all stereotypes
38 Civil War rape which led to pregnancy recalled in new TV documentary
39 We pictured idyllic summers, colour schemes, playrooms for the kids. Then we saw the house
40 Louth publican ‘apprehensive but excited’ to reopen after six months
Real news has value SUBSCRIBE