Few rooting for Donald Trump on his mother’s Scottish island 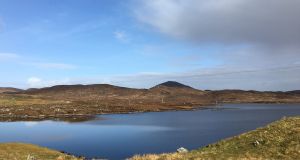 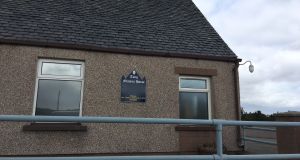 The Presbyterian Mission Hall in Tong, Lewis, on the site where Donald Trump’s mother, Mary Anne MacLeod, worshipped when she lived on the island. Photograph: Peter Geoghegan 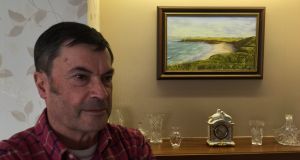 Rev James Maciver, who grew up near the MacLeod home in Tong: “Donald Trump’s lifestyle would not be compatible with his background on the island.” Photograph: Peter Geoghegan 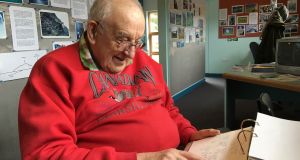 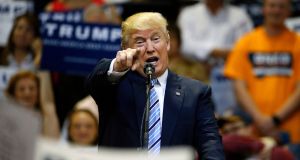 Stornoway, on the Outer Hebridean island of Lewis, is not exactly renowned for its exuberance. Most of the town’s population of 8,000 live in pebbledash houses that rise up a gentle incline from the port. Most of Stornoway’s shops – and bars – still close on Sunday to observe the Sabbath.

Trump’s mother, Mary Anne, was born in the village of Tong, just a couple of miles north of Stornoway, in 1912. More than a century on, islanders still have a fondness for Mrs Trump – but have little time for the brash American real estate developer, reality TV star and Republican candidate for US president.

Mary Anne was born in a black house, a low, thatched-roofed stone cottage common on Lewis. Along with her nine siblings, she would have spoke Scots Gaelic. The single storey Tong Mission Hall still sits on the same site where young Mary would have worshipped in the local Free Church.

“Mary McLeod’s girlhood was very much one of all encompassing religion. A lot of young people grew up in a very oppressive environment,” says John MacLeod, a Lewis-based journalist and author. “Places demanded complete conformity, especially for young women,” says MacLeod. The young Mary Anne would have been wary of being trapped into looking after her aging parents if she did not marry.

Finding a husband in post-war Lewis would not have been easy. The Lewis economy was on its knees in after the herring industry collapse. Promises of land made to men who fought in the first World War were not kept. Thousands emigrated. In 1923, 200 people left the island on the Metagama, bound for Canada. Mary Anne departed for New York in 1930.

“The 1920s would have been a very difficult time. You’re talking about the aftermath of world war one, financial and economic problems would have chiefly been the reasons why many people left Tong,” says Rev James Maciver, a minister who grew up near the MacLeod home in Tong. “My parents knew her and her immediate family. If Trump was in the news or in the papers you’d hear them mention her,” he adds.

Trump's mother became known for her charity work and philanthropy while his father developed a reputation as one of New York's biggest real estate developers. She died at the age of 88 in New York in 2000.

Such an approach to life is at odds with Trump’s avowed individualism. “I don’t think Donald’s tendency to look down on people would have come from the attitude to life his mum would have taken with her across to North America,” Maciver says.

Lewis is arguably the UK’s last religious redoubt. The island is pockmarked with churches from a range of Presbyterian sects. Although observance is still strong –  Sunday ferries only started to run from Stornoway to the mainland in recent years –  it would have been much stricter in Mary Anne’s youth.

“It was committed Protestant, Calvinistic religion, one which had a strong emphasis on keeping the Sabbath,” says Maciver.

Few on the island are rooting for a President Trump come November. Many islanders sarcastically refer to him as “Domhnall Iain” – the Gaelic for his first and middle name.

“Culturally it is a total misfit from what he would he would espouse as values to aspire to. People here are modest in terms of their achievements, leaving the boasting to others. That’s the way we are, I suppose it’s the Presbyterian ethics. Not only is (boasting) not it encouraged, it is positively discouraged,” says local broadcaster Kenny MacIver.

Many on Lewis resent the new-found media focus in the wake of Trump’s political success. A BBC TV report earlier this year that opened with the Father Ted theme tune and mispronounced the word “Gaelic” caused particular anger locally.

One person who is firmly behind Trump is Derick Mackenzie, who set up the Facebook page “Isle of Lewis supports Trump for President” (113 likes at the time of writing). “I think he is honest. Honesty is rare today - especially amongst politicians,” Mackenzie told me. “He supports the Bible. The reason our world is in moral and economic ruin today is because we in the West have over time thrown the Bible away. This is fatal.”

Trump still has family on the island. Two of those cousins, William and Alasdair Murray, live in the MacLeod family home in Tong. Mary Anne MacLeod became a US citizen in 1942 but she frequently returned to Lewis. Trump’s older sister, Maryanne Trump Barry, a senior judge, has visited dozens of times and is well liked. Last year she donated £160,000 (€190,000) to a care home and hospice in Stornoway.

For decades, Trump showed little interest in his mother’s native land. That changed in 2008, when he began lobbying the Scottish government to build a golf course in Aberdeen. On a whistle-stop visit to the island that summer, Trump told reporters: "It's interesting when your mother, who was such a terrific woman, comes from a specific location, you tend to like that location. I think I do feel Scottish."

Kenny MacIver, like many islanders, is sceptical about Trump and his commitment to Lewis. “Before he wanted to build his golf course he didn’t mention his Scottish roots.”

* An updated version of this article was published on July 29th, 2016

Coronavirus: Further 430 cases reported in State is most since April

1 Coronavirus: Further 430 cases reported in State is most since April
2 More than 30 people queue overnight to secure property in Carlow
3 Gardaí appeal for information on rape of teenager in Co Mayo playground
4 Traffic volumes show Donegal locking down to greater extent than Dublin
5 Man with electric scooter who died in Meath was due to get married in the coming weeks
Real news has value SUBSCRIBE