Dumbledore and Gandalf to marry in front of gay-hating church 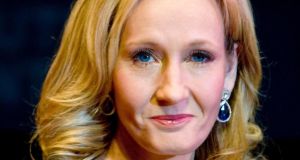 JK Rowling: had row on Twitter with Westboro Baptist Church after suggesting that if Harry Potter’s Dumbledore and Lord of the Rings wizard Gandalf were to wed, they could marry in Ireland following the referendum. Photograph: Ian West/PA Wire 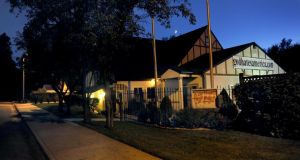 Westboro Baptist Church in Topeka, Kansas: US equality group Planting Peace plans to hold a wedding between the Harry Potter and Lord of the Rings characters in front of the anti-gay group’s building this weekend. Photograph: Michael S Williamson/The Washington Post via Getty Images

JK Rowling’s dream of a marriage between wizards Dumbledore and Gandalf, embraced by the author on social media following Ireland’s same-sex marriage referendum, will soon become a reality.

US equality group Planting Peace plans to hold a wedding between the Harry Potter and Lord of the Rings characters in front of the anti-gay hate group, the Westboro Baptist Church, in Kansas this weekend.

Ms Rowling, known for standing up to online trolls, and the Topeka-based church, engaged in a war of words on social media after she applauded the Irish people for passing same-sex marriage, the first country in the world to legalise gay unions by a popular vote.

Responding to a meme posted on Twitter, Ms Rowling suggested that if Dumbledore, the headmaster of Harry Potter’s wizarding school Hogwarts, and Lord of the Rings wizard Gandalf, were to wed, they could marry in Ireland following the referendum.

The Westboro Baptist Church tweeted last month that if the two fictional characters were to marry in Ireland, they would picket the ceremony.

“Alas, the sheer awesomeness of such a union in such a place would blow your tiny bigoted minds out of your thick sloping skulls,” the Harry Potter author tweeted in response to the Kansas-based group

The church may not have too long to wait, or indeed too far to travel for an opportunity to protest.

So @jk_rowling wants Dumbledore & Gandalf to marry in Ireland; if it happens, WBC will picket! #NotBanned @pinknews pic.twitter.com/zY7hT09Nv4

.@WBCsigns Alas, the sheer awesomeness of such a union in such a place would blow your tiny bigoted minds out of your thick sloping skulls.

Aaron Jackson, founder of Planting Peace, who bought and established “Equality House” opposite the Westboro Baptist Church to counter its anti-gay campaigning, said that the group would host the marriage of Gandalf the White and Professor Albus Dumbledore at the house on Sunday afternoon.

The marriage of the characters (played by volunteer actors) will take place right across from the WBC’s front lawn.

“When we read the battle between JK Rowling and the Westboro Baptist Church, we instantly connected with Ms Rowling’s message on many levels,” said Mr Jackson.

“The Equality House was founded to take a stand against the hurtful words and actions of hate groups like the WBC.”

Ms Rowling replied to online criticism for drawing attention to the hate group by engaging with them publicly, saying: “It’s important that scared gay kids who aren’t out yet see hate speech challenged.”

Mr Jackson said that Ms Rowling’s words were “spot on”.

“We must actively stand up to hate and ensure that LGBTQ [lesbian, gay, bisexual, transgender and queer] youth understand that they have a broad platform of love and support in this world,” he said.

“We are delighted to be hosting the Dumbledore and Gandalf wedding and stand with them in the face of bigotry and celebrate equality for all.”

Planting Peace was “thrilled” with the passing of Ireland’s same-sex marriage referendum, the group said, and hopes to see a similar outcome at the supreme court in its ruling on two landmark cases this month that could pave the way for gay unions across the United States.

“Internationally, the passing of laws that support marriage equality is a mark of progress,” the charity said.

In lieu of wedding gifts for Gandalf and Dumbledore, Planting Peace hopes to raise funds to “challenge the hateful message of the WBC” through a crowd fundraising website.

“The WBC won’t have to go too far to picket his union,” said Mr Jackson. “They can look out their front window.”