America Letter: Cathal Armstrong had fed the Obamas and championed causes from immigrants’ rights to a healthier diet 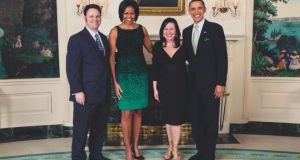 Cathal Armstrong and his wife with Barack and Michelle Obama

Americans sat down to consume an estimated 46 million turkeys on Thanksgiving Day on Thursday, with traditional side dishes of sweet potato and marshmallow-and-green-bean casserole.

Cathal Armstrong, the Dublin-born chef behind the acclaimed four-star Restaurant Eve just outside Washington DC, isn’t really into the traditional Thanksgiving feast, but he happily helps customers source “heritage turkeys” from a farm in Virginia called, appropriately enough, the Fields of Athenry.

Armstrong worked one Thanksgiving at Bistro Bis, a French restaurant on Capitol Hill, early in his career and vowed never to do it again. The holiday is reserved exclusively for family now.

Restaurant Eve, which will be open a decade in Alexandria, Virginia, next April, is the food equivalent of Disneyland – a rollercoaster of thrills for the palate, conjured up from Armstrong’s French training and years of culinary travel with his tour operator and amateur chef father from Killiney, Co Dublin.

His menus offer delights such as crème fraiche panna cotta with chad roe; fingerling crisp potatoes and leek oil; and veal sweetbreads with kohlrabi sauerkraut, cognac-poached apples and potato purée. He is also publishing a cookbook in March coinciding with the restaurant’s 10-year anniversary.

Not bad for a fella who attended Coláiste na Rinne in Co Waterford and played for Dublin’s minor hurling team.

A taste of home
Never far from his Irish roots, Armstrong (44) opened Eamonn’s Dublin Chipper in Alexandria a year after Restaurant Eve (both are named after his children). There he sells battered fish and chips – “thanks be to cod” says the sign on the door – and shelf essentials such as Fanta Orange and Cadbury’s chocolate to expats pining for a taste of home.

The business does a brisk trade but not so much on the takeaway side. US diners don’t do the takeaway fish-and-chips like the Irish enjoy after a feed of pints, Armstrong says: they prefer to sit in.

He originally wanted to open a Ballymaloe House-type Irish country inn in the Virginia countryside but baulked at the $4 million his investors wanted him to borrow to match their $1 million in seed capital.

“I needed to sleep at night,” he says. He and his wife Michelle abandoned the accommodation idea when they found a crumbling restaurant in Alexandria with potloads of potential.

The chef was surprised by the adventurous tastes of Alexandria’s residents, and his food has got edgier and edgier. For years, Washington had been a steak-and-potatoes city with little fine dining: the restaurants reflected the appetites of those who accompanied governing administrations. The Bushes tended not to eat out, says Armstrong, not the case under Clinton, and it changed again under Obama. “We are seeing a good resurgence with the Obamas, who are more known for eating out.”

The Obamas ate at Restaurant Eve in 2011 on one of their date nights. Armstrong was off that night when the restaurant called him and told him get his chef whites on immediately.

Aside from his clear talent in the kitchen, Armstrong is not afraid to get as political as many of the customers he feeds. He has stepped out of the kitchen to champion causes that are important to him.

A former illegal immigrant in the US and now an employer of almost 200 people, he spoke recently at a meeting in Arlington, Virginia, urging Congress to pass laws that would put an estimated 11 million illegal immigrants on the path to US citizenship, including an estimated 50,000 Irish in America. The vast majority are honest, hard-working people who want to build better life for themselves, he says.

“The criminal element is really exaggerated to take the light off the fact that there are people like me who come here and just work and have a family. We need a creative way where they can get access to legal status, where it doesn’t have to be a lottery or an amnesty.”

Lobby groups
An advocate of Michelle Obama’s food movement and “Let’s Move” campaign, Armstrong despairs at the high levels of sugar and artificial sweetener in American food, including basics such as bread, and the influence of the corn industry, the heavy government subsidies of which have led to unhealthy food additives such as high-fructose corn syrup and modified corn starch in many food products. He fears for the effect of corn feed on cattle and how this might lead to acid-resistant strains of E.coli. Against powerful lobby groups, Armstrong says the only way to force wider change is for individuals to change one by one, by putting ticks in “the plus-one column”.

Restaurant Eve’s staff spends a lot of time shopping, trying to find high- quality produce, he says. For example, he sources sustainably sourced Boston blue cod (pollock) for the chipper because of the threat to stocks of cod.

“We cannot bury our heads in the sand and say that the problem is too big, that they are never going to end subsidies.

“There is a small but growing movement of people that are concerned about what they eat and what they serve to people. All I can affect is my environment. If I can start a chain reaction, then small change will become big change.”