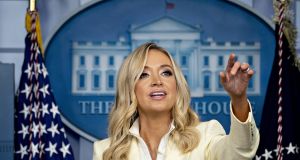 Efforts to highlight Donald Trump’s largesse during his time in office have backfired after his press secretary appeared to display the US president’s personal bank details to the world.

At a press conference on Friday, Kayleigh McEnany announced that Trump would donate his quarterly pay cheque to the Department of Health and Human Services to “support the efforts being undertaken to confront, contain and combat the coronavirus”. So far, so laudable.

However, when she held up the $100,000 cheque for White House reporters to see, it came complete with all Trump’s banking details.

An administration official told the New York Times mock cheques were never used in the briefing, with a White House statement saying, “Today his salary went to help advance new therapies to treat this virus, but leave it to the media to find a shameful reason not to simply report the facts, focusing instead on whether the check is real or not.”

Having such details puts a bank account at risk of hacking or use by others.

Mike Chapple, a teaching professor of information technology at the University of Notre Dame, said this showed why large promotional cheques were used for TV.

“They’re not only a nice prop onstage, but they also omit the sensitive account information that normally appears at the bottom,” he said. “The rest of us should play it safe and keep our account numbers to ourselves.” – Guardian