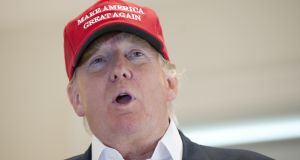 Mr Trump, who will almost certainly be the Republican presidential nominee, picked up the endorsement of the National Rifle Association, a politically powerful lobbying group which claims more than four million members.

Mr Trump’s remarks at the NRA’s national convention in Louisville, Kentucky, were not a surprise, but they could solidify his status among conservatives who see protecting the US Constitution’s Second Amendment as a top priority.

Mr Trump also planned to meet on Monday with US Senator Bob Corker of Tennessee, a source close to the Trump campaign said. The two are expected to consult on foreign policy. The source said Mr Corker remains on Mr Trump’s list of potential vice-presidential running mates.

Ms Clinton, who is close to clinching the Democratic Party’s nomination for the November 8th election, has vowed to take on the gun lobby and expand gun control measures to include comprehensive background checks for gun buyers, including at open-air gun shows and online.

Mr Trump, who is trying to unite the Republican Party behind him after a brutal primary campaign, accused Ms Clinton, a former secretary of state to president Barack Obama, of wanting to end the Second Amendment, which says in part that the people’s right to keep and bear arms “shall not be infringed”.

Ms Clinton senior policy adviser Maya Harris said Mr Trump is peddling falsehoods and denounced “Donald Trump’s conspiracy theories”. She said Ms Clinton believes there are “common-sense steps we can take at the federal level to keep guns out of the hands of criminals” while protecting the Second Amendment.

Mr Trump told the NRA he would eliminate gun-free zones imposed in some areas, noting that the 2015 shooting deaths of four US Marines at an armed forces recruiting centre in Chattanooga, Tennessee, took place in a gun-free zone.

The NRA’s convention took place on the same day that a man brandished a gun at a checkpoint near the White House in Washington and was shot and wounded by a law enforcement officer.

Chris Cox, executive director of the NRA’s Institute for Legislative Action, said it was time for them to get over their qualms about the 69-year-old candidate.

“If your preferred candidate is out of the race, it’s time to get over it,” Mr Cox told the NRA audience. “Are there valid arguments in favour of some over others? Sure. Will any of it matter if Hillary wins in November? Not one bit.”

In another step toward trying to unify the party, Mr Cox has invited members of Congress to a “small roundtable discussion” with one of Mr Trump’s sons, Donald Trump jnr, on Wednesday, a copy of the invitation said.