Joe Biden has been officially nominated as the Democratic Party’s nominee for November’s presidential election, after he reached the threshold of delegates required. Video: Joe Biden/ Youtube 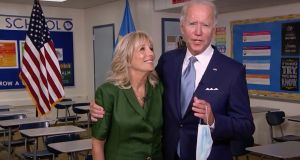 Joe Biden has been officially nominated as the Democratic Party’s presidential nominee, after he reached the threshold of delegates required on the second night of the party’s convention.

Political grandees – from both the Democratic and Republican parties – lined up to endorse the former vice-president as he seeks to take on Donald Trump in November’s election.

In keeping with the virtual nature of the convention, delegates cast their votes from states across the country in a remote “roll call”, rather than attending the event in person.

For the second consecutive night, senior Republicans appeared on screen to back Mr Biden, as Democrats seek to build as broad a coalition as possible to try to defeat Mr Trump.

“I support Joe Biden for the president of the United States . . . Our country needs a commander in chief who takes care of our troops in the same way he takes care of his own family,” he said.

Without mentioning the current president of the United States directly, he said: “What a difference it will be to have a president who will unite us.”

“Joe Biden will be a president we will all be proud to salute. With Joe Biden in the White House, you will never doubt that he will stand with our friends and stand up to our adversaries – never the other way around. He will trust our diplomats and our intelligence community, not the flattery of dictators and despots,” he said.

A video highlighting the friendship between Mr Biden and the late senator John McCain was also played, underlying the Democratic nominee’s connections with another giant of Republican politics.

“Donald Trump says we’re leading the world,” he said in a pre-recorded message from his home in upstate New York. “Well, we are the only major industrial economy to have its unemployment rate triple. At a time like this, the Oval Office should be a command centre. Instead, it’s a storm centre. There’s only chaos . . . The buck never stops there.”

He continued: “If you want a president who defines the job as spending hours a day watching TV and zapping people on social media, he’s your man. Denying, distracting, and demeaning works great if you’re trying to entertain and inflame. But in a real crisis, it collapses like a house of cards.”

Former President Barack Obama, who was due to deliver a speech on Wednesday night, praised his former running mate in a 60-second ad released by the Biden campaign on Wednesday. “Through his life he has never once forgotten the values and moral fibre that made him who he is – the best part is he’s nowhere close to finished,” he says of his former vice-president.

Amid calls from some in the party for Alexandria Ocasio-Cortez to be given a long speaking slot, the New York congresswoman delivered a brief but pointed defense of progressivism as she gave one of the official nominating speeches for Bernie Sanders, who technically remained in the race after suspending his campaign in April.

Mr Biden’s wife, Jill, gave the closing address for Tuesday’s events, speaking live from the Delaware high school where she once taught. Her speech focused on the impact of coronavirus and the challenges facing parents across the country amid uncertainty over whether students will be able to return to their classrooms.

“As a mother and a grandmother, as an American, I am heartbroken by the magnitude of this loss, by the failure to protect our communities, by every precious and irreplaceable life gone. Like so many of you, I’m left asking: how do I keep my family safe?

She also recalled how she met Mr Biden after he had lost his first wife and infant daughter in a car crash and became a mother to his two young sons. “How do you make a broken family whole? The same way you make a nation whole. With love and understanding, with small acts of kindness, with bravery, with unwavering faith,” she said.

In a statement as the second night of the convention finished, the Trump campaign said that Mr Biden’s official nomination meant that “his supervisors from the radical left are now formally in charge”.

“When they were counting the delegates tonight, somebody should have been totalling the $4 trillion in new taxes that Joe Biden would heap on Americans if elected.”