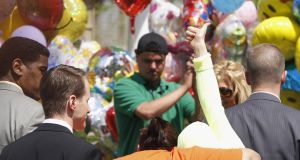 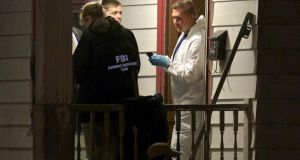 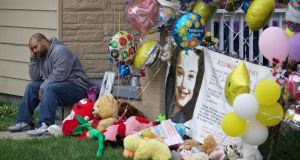 Ricky DeJesus, brother of Georgina DeJesus, holds his head in his hand outside his family’s home in Cleveland, Ohio, yesterday. His sister, Georgina DeJesus, was one of three Cleveland women found alive after vanishing in their own neighbourhood for about a decade ago. Photograph: John Gress/Reuters 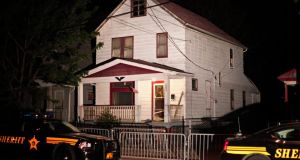 The exterior of the house where three women who had disappeared as teenagers approximately ten years ago were found alive on Monday in Cleveland, Ohio. Photograph: Bill Pugliano/Getty Images 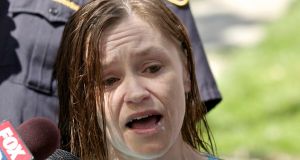 Two newly freed Cleveland women had family homecomings today after a decade of captivity in a house where police said chains and ropes had been used to hold them prisoner.

Neither Amanda Berry nor Gina DeJesus spoke publicly as they were hustled past crowds of spectators and media.

Ms Berry (27) and her 6-year-old daughter, who was conceived and born in captivity, could be seen from an aerial television camera arriving in a convoy of vehicles at her sister’s house and going in the back door.

Ms DeJesus (23) was rushed into the home she had not seen in nine years, clenched in a tight embrace by her sister Mayra. Ms DeJesus hid her face in a yellow hoodie but raised her hand in a thumbs-up sign to the crowd that was chanting “Gina. Gina.”

“There are not enough words to say or express the joy that we feel for the return of our family member Gina, and now Amanda Berry, her daughter and Michelle Knight who is our family also,” Ms DeJesus’ aunt Sandra Ruiz said outside the house.

“I want to say thank you, but I’m also going to put my foot down as the mean one of the family,” she said. “We are asking for your support to be patient with us. Give us time and privacy to heal. When we’re ready, I promise every single one of you guys that we’ll talk to you.”

Police released some details about the search of the house where the women had been held, including the discovery of chains and ropes used to tie up the victims. Police said no human remains had been found.

Three brothers identified by police as suspects were expected to be charged by the end of the day, police said.

One suspect, Ariel Castro (52), who was fired from his school bus driving job in November for “lack of judgment,” was arrested almost immediately after the women escaped on Monday.

His brothers Pedro Castro (54) and Onil Castro (50) were taken into custody a short time later. Police have not said what role each man is suspected of playing, but Ms Berry named Ariel Castro in an emergency call to 911 on Monday as the man from whom she was trying to escape.

Before Monday evening, Ms Berry had last been seen leaving her job at a fast-food restaurant the day before her 17th birthday in April 2003. Her disappearance as a teenager was widely publicised in the local media.

Appearing on the lawn of the house, Ms Berry’s sister, Beth Serrano, was greeted with shouts and cheers from a crowd of well-wishers who had gathered along with photographers, television crews and reporters.

“At this time, our family would request privacy so my sister and niece and I can have time to recover,” Ms Serrano said, her voice quaking. “We appreciate all you have done for us for the past ten years. Please respect our privacy until we are ready to make our statement. And thank you.”

Ms DeJesus’ father Felix pumped his fist in the air as his daughter went inside. The DeJesus house is about three miles from the Castro house.

The three women had been hospitalised and released following their rescue. Ms Knight was re-admitted to the hospital today in good condition, a spokesman said.

Euphoria over the rescue of the women on Monday was giving way to mounting questions about how their imprisonment in a house on a residential street had gone undetected for so long.

Several neighbours said they had called police to report suspicious activity at the house in a dilapidated neighbourhood on Cleveland’s West Side, but police denied those calls had been made.

“We have no record of those calls coming in over the last ten years,” Cleveland Police Chief Michael McGrath said on Wednesday on NBC’s “Today” show. Chief McGrath said he was confident police did not miss opportunities to find the missing women. “Absolutely, there’s no question about it,” he said.

Agents from the Federal Bureau of Investigation were searching through the house where the women were believed to have been held since vanishing, Chief McGrath said. “We have confirmation that they were bound, and there (were) chains and ropes in the home,” he said.

McGrath said the women had been allowed outside “very rarely” during their captivity. “They were released out in the backyard once in a while,” he said.

Cleveland Mayor Frank Johnson said on Tuesday that child welfare officials had paid a visit to the house in January 2004 because Castro was reported to have left a child on a school bus while he stopped for lunch at a fast-food restaurant. But no one answered the door and the ensuing inquiry found no criminal intent, officials said.

Born in Puerto Rico, Ariel Castro played bass in Latin music bands in the area. Records show he was divorced more than a decade ago and his ex-wife had since died. He is known to have at least one adult daughter and son.