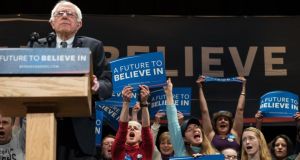 The idea that young female voters would like to see a woman in the White House, yet they vote for a 74-year-old male senator, speaks volumes about their views of the woman trying to be the first female president.

In Monday’s Iowa caucuses, the first ballot in the presidential race, women aged 29 and younger voted for Hillary Clinton’s rival Bernie Sanders by a remarkable margin of about six to one, according to a poll of voters arriving to vote at the caucuses conducted for the US media.

Overall, Sanders, the self-declared democratic socialist senator from Vermont, won voters under the age of 30 by 70 points, eclipsing even the popularity of Barack Obama in 2008, who scored a 57-point win.

Sanders also beat Clinton 58 to 37 among voters aged 30 to 44, while Clinton was the preferred choice of older women.

The results made sense of the massive following the Vermont senator has enjoyed during his campaign, packing out university auditoriums with students chanting “Bernie! Bernie!” and “Feel the Bern”, his campaign’s unofficial slogan.

“That’s amazing,” said Clinton of Sanders’s stunning youth vote at a Democratic forum in New Hampshire, the second state to vote next Tuesday, which was televised by CNN on Wednesday night.

“I accept the fact that I have work to do to convey what I stand for, what I’ve accomplished, what I want to do for young people in this country,” she said.

On the campaign trail in Iowa, Sanders’s supporters felt that Clinton was too close to Republican policies and too cosy with Wall Street and big corporations to be trusted on her recent conversion to the progressive issues that Sanders has pursued all his life.

He has won over many students with his plan to introduce free college tuition for all, while Clinton has said that only public colleges should be “debt free” and that the government should not fund college education for “Donald Trump’s kids” and others who can afford it.

The lack of support among young women is at odds with Clinton’s portrayal of herself as life-long women’s advocate in her campaign, her feminist policy positions of equal pay for equal work and her support from young female celebrities such as Lena Dunham and Katy Perry.

“I don’t like Hillary Clinton. I have voted Democrat my whole life and I will not vote for Hillary. I think she is a somewhat moderate Republican man in a woman’s suit,” said Naseem Hesler (40), who was attending a Sanders rally in the Iowa town of Fairfield.

Hesler was standing with her daughter and best friend at the back of a large crowd waiting to hear Hollywood actress Susan Sarandon introduce Sanders. She was wearing a Sanders T-shirt with “Thelma & Louise” on it, referring to the feminist road movie starring Sarandon.

“I don’t feel the fact that she is a woman has anything to do with being the president and I don’t like her position on the issues and I don’t believe her,” she said.

Sarandon, when she took to the stage, mentioned the backlash she has received for backing Sanders and not Clinton.

“I have found a lot of resistance and a lot of sexist talk because I have chosen to support Bernie Sanders and not a woman,” she said.

“But for me the thing that is important is the consistency and moral courage of consistency on issues through the years.”

Sanders’s attacks on Clinton’s progressive credentials – her change to support same-sex marriage, her vote for the Iraq war, her backing of free trade deals – have not helped her standing among the young.

Neither, it seems, have Bill Clinton’s appearances on the campaign trail and how they raised discussion around how, in the 1990s, she and her aides discredited women who said they had sexual encounters with him.

“People are in love with the idea of having of a female president but with her not so much.

“A lot of people around my age think she is trying so hard to be, like, relatable and stuff,” said Alexis Isabel Moncada, a 17-year-old who founded a popular blog called Feminist Culture.

“Yes, she says that she is pro-women but with the Bill Clinton allegations, she basically covered up what he did and blamed the women that were involved. That is not really pro-women at all.”

At Wednesday’s town hall, one audience member said that she had five girls, all twentysomethings, and they were all “feeling the Bern”. She asked Clinton what she would do to convince them to vote for her.

“There are challenges and obstacles to young women’s ambitions,” she replied. “And I’m going to try to break the highest and hardest glass ceiling.

“I hope it splinters completely and I hope for your daughters it opens doors that might not be open right now.”