BER is nine years late, wildly over budget and opening during a pandemic 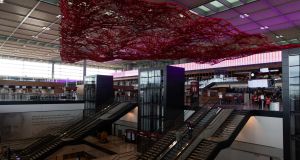 The check-in hall of Terminal 1 at Berlin Brandenburg Airport in Schoenefeld, Germany, which is due to open on Saturday. Entire sections of the finished airport had to be ripped out and replaced. Photograph: Hayoung Jeon/EPA

Returning to Berlin’s new international airport after a long absence is like returning to Manderley. The sprawling pile looms large as you approach and exudes such fascination that you forget the feeling of dread that, soon again, it will all go up – or down – in flames.

Strolling through the main airport hall is like travelling back in time, with cream floor tiles and cherrywood counters giving a a definite whiff of a mid-range Marriott hotel circa 2006.

That is when the airport was designed and first sod was turned on the site, 30km southeast of the city centre. A turbulent seven-year building process had passed by the time a whippet of a PR man led me through the hall in May 2013.

Like an estate agent distracting from damp patches, he waved his hand upwards at a red squiggle of art dangling from the roof. My eyes were on the ragged holes in the tiled floor, surrounded by men wearing hard hats and worried expressions.

“We’ve run so many tests, we’re right on schedule,” the PR man insisted defiantly. “We’re not going to have a debacle like Heathrow’s Terminal Five.”

The London airport had just come through some teething problems with a new baggage handling system. Berlin, on the other hand, was already a year late. All was well, until all wasn’t well at all.

Days after my tour in 2013 the June 3rd opening was cancelled and from then on, as Berlin diva Hildegarde Knef once warbled, it was all downhill.

The canary in this coalmine was the smoke-extractor system, which failed all fire-safety tests. When auditors looked closer, they discovered 14,750 snags, just for fire safety: dozens of fire exits that exited to nowhere and 1,400 other fire doors that failed to open remotely.

Like a house of horrors, one problem led to the next: a computer network no one could control – not even to turn on and off the lights – tiles laid incorrectly and 1,300 rooms with the wrong room numbers.

Entire sections of the finished airport had to be ripped out and replaced, including 90km of cabling, 2km of water pipes and hundreds of smoke alarms.

The car park floors began to sag because not enough steel girders were used in building. The escalator from the underground train station was too short.

The new smoke extraction system is so large it was installed in what was to be the first class lounge, with expensive panorama windows over the airfield.

Given all the ghosts and curses, it is appropriate that the new airport goes into service on Halloween. Its opening triggers the shutdown, in a week’s time, of Tegel Airport in Berlin’s northwest. Well-formed and widely loved, Tegel, like the first Mrs de Winter, will be a tough act to follow.

Generations of West Berliners viewed Tegel was a portal to freedom in the wall era and are now in mourning as if for a beloved family friend. At this juncture they are divided on whether the new airport is a silly young bride, an arriviste upstart, or both.

BER’s fate as an expensive folly began in 2001 when then mayor Klaus Wowereit cancelled a valid contract with construction company Hochtief. The Social Democrat, who once said his favourite kind of Champagne was the free kind, insisted the airport’s owners – the states of Berlin, Brandenburg and Germany’s federal government – could build better and cheaper.

Hundreds of contractors and subcontractors did their own thing with little communication or oversight. The architects, overwhelmed with expensive alterations demanded by their political clients, walked out on the job.

Promised opening dates came and went – in 2014, 2016 and 2017 – with a revolving door of managers and engineers. Costs spiralled from the original €2.7 billion estimate to more than €6 billion.

The half-finished airport has been closed for so long that, each night for the last eight years, an empty train has passed through the underground station to keep the air moving and prevent mould. Upstairs, paid staff flush the toilets daily to keep the plumbing working. Last year, departure hall monitors reached the end of their natural life and were replaced.

That the airport is opening at all is thanks to chief executive Engelbert Lütke-Daldrup. With the looks of a grown-up Harry Potter and the severe manner of Mrs Danvers, he agrees that the airport has left Berlin a laughing stock. But he has more pressing problems now: how to manage an airport everyone feared would be too small and which, in the middle of a pandemic, is an expensive, empty white elephant.

At the last minute, Lütke-Daldrup decided to cancel Saturday’s opening party. Nine years late, three times over budget and with a pandemic raging, there is little to celebrate. Instead BER airport, an expensive monument to the shameless incompetence in Berlin’s city-state government, will “just open”.