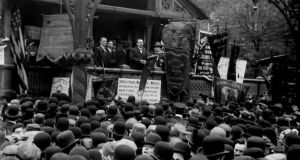 James Connolly addressing the masses in Union Square on May Day in 1908. It is the only published photograph of the labour activist during his time in the US and one of the only occasions he was ever photographed speaking. Photograph: Library of Congress

“Tomorrow is Labor Day,” proclaimed the ad in the Chicago Daily Tribune of September 5th, 1909. “With the last picnic event of the Socialist Party, with sports, dancing and fervid oratory, Hon James Connolly is our principal speaker.”

The Scottish-born labour activist, one of the leaders of the 1916 Rising, was on his third nationwide tour of the United States at the time and sharing the bill with the “famous Rossmore kennel . . . toy dogs worth over a thousand each”. Connolly travelled as far away as Butte, Montana and El Paso, Texas, on a mission to ease the prejudices against socialism among Irish Americans.

The Chicago clipping is one of the many intriguing nuggets of information dug up for a new exhibition – Labour & Dignity: James Connolly in America – which opened this week in the Irish Consulate in New York. The exhibition fills in gaps in Connolly’s life between 1903 when he left Dublin, until 1910 when he returned to Ireland moulded as a socialist and revolutionary. His time in America primed Connolly to take a lead role in the 1913 Dublin Lockoutand the Easter Rising.

Leader of men
“He had gone away from Ireland a propagandist; he was returning a leader of men,” wrote Connolly’s biographer and historian of the Irish labour movement RM Fox of his time in the US.

Connolly’s life in America is retold in the exhibition by way of American newspaper clippings, posters, pamphlets, photographs and a selection of his writings from the Harp, the newspaper of the Irish Socialist Federation, which he edited. Connolly arrived in New York in search of work in 1903. He was first employed as an insurance salesman in Troy, New York, lying about his finances to get the job. He later worked as a lathe operator in the Singer Sewing Machine Company in Elizabeth, New Jersey, before becoming a national organiser for the Socialist Party of America in 1909 and 1910.

Among the exhibits is one eye-catching image of Connolly, the only published photograph of the labour activist during his time in the US and one of the only occasions he was ever photographed speaking. He is pictured addressing almost 8,000 people assembled on May Day 1908 in Union Square, just north of Greenwich Village. Next to the podium is the banner of the Irish Socialist Club emblazoned with the slogans “Fag a’Bealac” (Clear the Way) and “Up Men and At Them!”

During his time State-side, Connolly’s travels with the Industrial Workers of the World, or the Wobblies as they were known, shaped his thinking on how to organise a mass pan-worker movement and the power of the sympathetic strike. This was used more effectively in Ireland than it ever was in the US when workers across Dublin joined tram employees on a strike that crippled industry during the Lockout. Connolly had tried to rally workers into a unified movement in the US. When non-unionised trolley workers spontaneously walked off the job in Yonkers, New York, in 1907, he urged them to encourage organised electricians and engineers to walk out too but they didn’t and their strike was weakened.

A champion in particular of the rights of foreign-born workers, Connolly was scathing of American individualism in his writings and wrote angrily about how the country’s capitalist leanings benefited only a minority. The shockingly poor working conditions and living standards of workers were mirrored in Ireland and the US during the first decade of the 20th century.

Believing that the American Dream and its offer of equal opportunities for all was illusory, he described the Statue of Liberty in the Harp in scornful terms: “It is placed on a pedestal out of the reach of the multitudes; it can only be approached by those who have the money to pay the expense; it has a lamp to enlighten the world, but the lamp is never lit, and it smiles upon us as we approach America, but when we are once in the country, we never see anything but its back.”

Daughter’s death
Connolly also experienced personal tragedy while living in the US. On the eve of his departure back to Dublin, a daughter, Mona, died from accidental burns. Connolly and his wife Lillie, a Co Wicklow woman, had seven children in all, one of whom was born in the US.

The exhibition, officially opened last night by Tánaiste and Labour leader Eamon Gilmore whose Department of Foreign Affairs and Trade funded the project, moves to Albany, New York and Newark, New Jersey, (where Connolly lived between 1905 and 1907) later in the year, while a duplicate exhibition will go on display in Ireland.

Daphne Dyer Wolf curated the exhibition with Dr Marion Casey, a lecturer in Irish-American history at New York University’s Glucksman Ireland House. The exhibit is one of several projects marking the 20th anniversary of the house, home to the university’s Centre for Irish and Irish-American Studies.

“We are not suggesting that the American labour movement influenced what was happening in Dublin, or that the Irish in the United States dominated labour leadership, or that James Connolly engineered any part of it,” said Wolf. “What we want to consider is how much these movements were fluid and interactive, how they reflected the worldwide plight of poor working people, how . . . information between labour agitators was flying freely back and forth across the Atlantic. We want to make it clear that Ireland was not isolated, and that the Lockout did not happen in a vacuum.”