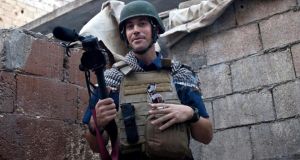 Journalist James Foley was on assignment for Boston-based website Global Post and the Agence France-Presse when he was taken hostage at a checkpoint in northern Syria in November 2012. Photograph: AP Photo 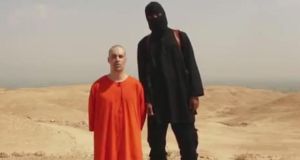 The Islamic State video showing Jame’s Foley’s murder is titled ‘A Message to America’ and shows the journalist on his knees, head shaven and hands tied behind his back, in an orange jumpsuit like those worn by the Muslim prisoners of Guantánamo. A hooded Islamic State militant, dressed in black, stands beside him in the desert, wielding a knife. Photograph: AP Photo

James Foley, the US photojournalist who has been beheaded by the so-called Islamic State, was an avid reader of the Koran who wanted to promote dialogue between Christians and Muslims, says his former fellow hostage, the French journalist Nicolas Hénin.

Hénin was freed on April 19th with three other French hostages after 10 months in captivity in Raqqa, the Islamic State’s stronghold in northern Syria. The Frenchmen were held with Foley for the last seven months of their imprisonment.

“James got hold of a Koran in English and he was fascinated by it. There were times he read it without interruption.”

When the hostages talked of their plans for the future, Foley joked that he ought to change professions. “After being taken hostage twice, he said his career as a reporter was obviously jinxed,” Hénin recalled.

Foley had been captured by Libyan troops and held for 44 days in 2011.

Foley was on assignment for Boston-based website Global Post and the Agence France-Presse when he was taken hostage at a checkpoint in northern Syria in November 2012.

YouTube removed the Islamic State video after a Twitter campaign with the hashtag #ISISmediablackout urged people not to watch it, suggesting that they instead share photos of Foley before he was kidnapped.

The Islamic State video is titled “A Message to America” and shows Foley on his knees, head shaven and hands tied behind his back, in an orange jumpsuit like those worn by the Muslim prisoners of Guantánamo. A hooded Islamic State militant, dressed in black, stands beside him in the desert, wielding a knife.

With a microphone clipped to his orange jumpsuit, Foley then recites what appears to be a prepared statement. “I call on my friends, family and loved ones to rise up against my real killers, the US government, for what will happen to me is only a result of their complacency and criminality,” he says.

Foley then addresses his brother John, described as a member of the US air force. “Think about what you are doing,” he says. “Think of the lives you’re destroying, including those of your own family. I ask you John: think of those who recently decided to bomb Iraq. Did they think of me, of you or of our family when they decided to do that?”

He continues: “I died that day, John. When your colleagues dropped that bomb on those people, they signed my death certificate. I guess in all, I wish I wasn’t an American.”

The black-hooded executioner then slashes Foley’s throat and decapitates him. In a British accent, he warns the US to cease its intervention in Iraq.

The US has staged some 90 bombing raids on Islamic State targets since August 8th, enabling the Kurdish Peshmerga to retake Iraq’s biggest hydroelectric dam this week.

“Today, your military air force is attacking us daily in Iraq,” the executioner continues. “Your strikes have caused casualties amongst Muslims. Any attempt by you, Obama, to deny the Muslims their rights of living in safety under the Islamic caliphate will result in the bloodshed of your people.”

The executioner then grabs a second kneeling prisoner by the collar of his orange jumpsuit. He is identified as Steven Sotloff. The freelancer for Time, World Affairs and the Christian Science Monitor was kidnapped near Aleppo a year ago. “The life of this American citizen, Obama, depends on your next decision,” the hooded man says.

The US National Security Council released a statement saying it was “appalled” and presenting “deepest condolences” to Foley’s family and friends. Unlike the French, the US and British governments refuse any form of negotiations for hostages. US intelligence is attempting to authenticate the video, the council said.

Hénin has no doubt that the man decapitated on the video was James Foley. “I recognised exactly the James I knew: straight and dignified, speaking in a strong voice and facing death with resignation, dignity and strength,” he said.

Foley’s family, too, are convinced their son was killed. “We implore the kidnappers to spare the lives of the remaining hostages,” the journalist’s mother, Diane, wrote on the Free James Foley Facebook page. “Like Jim, they are innocents. They have no control over American government policy in Iraq, Syria or anywhere in the world. We have never been prouder of our son Jim. He gave his life trying to expose the world to the suffering of the Syrian people.”

At least nine western journalists are still held hostage by the Islamic State. “In a large group of hostages, nearly everyone ends up quarrelling with everyone else,” Hénin recalled.

“James was the only one who was friends with everyone. That’s why his murder is so disgusting. No one deserves what happened to him, but he really didn’t deserve to be killed. He was the guy the others turned to in their bad moments. He was the one who knew how to comfort the others.”