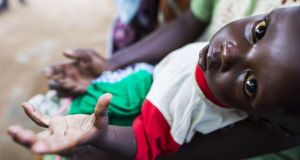 It’s a shift that has taken place slowly and without fanfare, but in the past 50 years the worst types of famine have become dramatically less frequent. Calamitous famines – those that cause more than a million deaths – have been eliminated. Great famines, defined as those that claim more than 100,000 lives, have reduced almost to vanishing point.

The death toll from these calamities zig-zagged through much of the 20th century, but since the 1960s, in a period of rapid growth in the world population, the line on the famines graph has been sloping steadily downwards. That historic change convinces many specialists that famine and conflict-induced starvation could be brought to an end by 2030.

Taking 117 countries and giving them scores based on four indicators – undernourishment, child wasting (children with low weight for their height), child stunting (those with low height for their age) and child mortality – the index reveals that since 2000 the level of hunger in developing countries as a group has fallen by 27 per cent. Seventeen countries have made “remarkable” progress, their index score having fallen by at least 50 per cent in the past 15 years.

In an essay to accompany the report, Alex de Waal, executive director of the World Peace Foundation, suggests that the end of the Cold War, the adoption of international human rights norms and the rise of globalisation are some of the key factors that make it possible to eliminate famine for the first time in history. Greater prosperity and interconnectedness mean people are less likely to starve in silence, he writes.

“Governments no longer wield the grotesque sovereign privilege to starve their people and tell the rest of the world to mind its own business.”

De Waal points to China as the single most important reason an end to famine is in sight. More than 80 million famine deaths occurred in China between 1870 and 1970, or more than half of the global total of 149 million such deaths. The country has been free of famine for half a century.

Long-term progress notwithstanding, however, the number of hungry people in the world remains unacceptably high, the report argues.

About 795 million people worldwide – roughly one in nine – are estimated to be chronically undernourished, according to the UN Food and Agriculture Organisation. The index shows that hunger levels are “alarming” or “serious” in 52 countries.

While sub-Saharan Africa (along with south Asia) has made the greatest improvement in absolute terms since 2000, a trend the report attributes partly to economic growth and advances in public health, the problem remains acute in the region.

Most of the eight countries with “alarming” scores are in sub-Saharan Africa, with the Central African Republic, Chad and Zambia at the head of the list.

Two – Burundi and Eritrea – had scores in 2014 that put them in the “extremely alarming” category. Somalia has been absent from the index since 2011 due to missing data, but the World Food Programme considers it one of the most food-insecure countries in the world.

A striking feature of current trends is the link between acute hunger and armed conflict.

“There is a common misperception that famine is caused solely by climate change, but increasingly conflict has become a major contributor to severe hunger and famine,” says Concern chief executive Dominic McSorley.

Drawing out that connection, the report notes that countries with the highest index score (or the greatest need) tend to be those engaged in or recently emerged from war.

That group includes Burundi, Comoros, Eritrea, Sudan and South Sudan (Syria is excluded due to lack of data). The report points out that most new wars are civil wars, which increasingly spill over borders, disrupt livelihoods and food systems, and force people to flee.

“They tend to be less lethal than old wars, both in violence and in hunger. But they are often intractable and display persistent, seemingly patternless violence from which no one is safe.”

In contrast, hunger is retreating in Ghana and Rwanda, which are relatively peaceful.

The report concludes with a warning. That the end of great famines is in sight is a tremendous achievement, it acknowledges.

But “unless armed conflicts can be reduced – and preferably ended – and the many invisible victims of violence can be reached with better humanitarian action and welfare policy, the gains will not last.”