Wife of IS hostage sent recording of him pleading for life 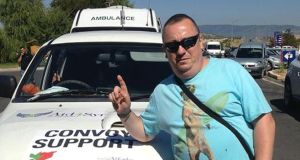 An undated handout photo of Alan Henning who has been taken hostage by Islamic State. His wife has said she has been sent a recording of him pleading for his life. Photograph: Mohamed Elhaddad/PA Wire.

The wife of British hostage Alan Henning has urged Islamic State to release him after she received an audio message from her husband pleading for his life.

Barbara Henning called for the militant group to “open their hears and minds” and said she had been told that a Sharia court had found her husband innocent of being a spy.

In a statement issued by the British foreign office, she said: “I have a further message for Islamic State. An audio file of Alan pleading for his life has just been received by me.

“I and people representing me continue to reach out to those holding Alan. Islamic State continue to ignore our pleas to open dialogue.

“I have seen Muslims across the globe question Islamic State over Alan’s fate. The voices of the people have spoken out loud and clear. He was working with Muslims to help the most vulnerable within Syria. Nothing has changed. He went to Syria to help his Muslim friends deliver much needed aid.”

Ms Henning said she was “at a loss why those leading Islamic State cannot open their hearts and minds to the facts surrounding Alan’s imprisonment and why they continue to threaten his life”.

She added: “I have been told that he has been to a Sharia court and found innocent of being a spy and declared to be no threat. I implore Islamic State to abide by the decisions of their own justice system.”

Mr Henning, a former taxi driver from Salford, was kidnapped last December in Syria by IS militants.

The 47-year-old aid worker was shown at the end of a video released earlier this month after the beheading of fellow British captive David Haines.

Last week Mrs Henning revealed she had sent messages to IS calling for the release of her husband, who she described as a “peaceful, selfless man”.

Mr Henning’s brother-in-law yesterday expressed fears that US-led air strikes could make it harder to find and rescue the hostage.

He is thought to have been held in the IS stronghold of Raqqa - one of the targets of the latest US-led aerial bombardment.