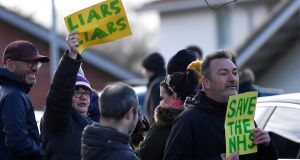 “Deep political cynicism is fuelled by the lies. The thing about those lies is that they obviously work.” Photograph: Toby Melville/AFP via Getty Images

Chief among the many weird aspects of the UK’s general election is the total disappearance of both Jacob Rees-Mogg and Brexit. The former has been banished by the PR handlers of the Tory campaign following his infamous remarks about the Grenfell Tower fire. And, apart from the vacuous slogan, “Get Brexit done”, the biggest event in modern British history is as visible as Rees-Mogg.

Brexit indifference is perfectly illustrated by the lack of interest in leaked official documents contradicting the oft-repeated remarks by ministers that there will be no trade checks between Britain and Northern Ireland following Brexit.

It didn’t really need someone to leak anything: a simple reading of the withdrawal agreement would confirm that there will be checks – unless the government decides not to enforce them. That, of course, is perfectly possible: reneging on treaty obligations is easily imaginable, as is the subsequent reaction of the European Union.

Betting markets and opinion polls point to a majority Conservative victory, although the vagaries of the electoral system still allow for the possibility of a hung parliament.

The sight of the left-leaning New Statesman refusing to endorse Labour (nobody can recall that ever happening) is consistent with a broader picture of a country still hopelessly divided and deeply cynical. The Financial Times, naturally pro-business, is anti-Tory: a remarkable perspective when you think about it. Considering the choice between Johnson and Corbyn, the Economist captured the mood of at least half the country when it stated that, come Friday, unlucky Britons will be faced with “one of these horrors in charge”.

That deep cynicism is fuelled by the lies. Those PR handlers have got their Trumpian message across: say whatever you like, it doesn’t matter. Cerebral commentators lament the total abandonment of even a pretence to truth-telling. They describe a political class returning to a pre-Enlightenment world where truth is irrelevant, the only thing that matters is power, not how you attain it or even what you do with it.

Welsh hairdressers light up social media with their fondness for Johnson: “His lying shows he is human.” People queuing up at food banks explain why they too will be voting Tory: Johnson is, apparently, the best liar of them all. And, of course, all politicians lie, don’t they? The thing about those lies is that they obviously work.

The big question focuses on what Johnson will do with power. The fear is that an ultra right-wing government will unleash the horror that the Economist fears. The hope is that political self-interest will prompt Johnson to use a parliamentary majority to tack to the centre.

There are two ways Johnson can get Brexit done next year. There remains the prospect of no-deal. Equally plausible would be a complete U-turn, a total reneging on all his Brexit promises: a free-trade deal with the EU that essentially maintains the status quo. Including (and especially) full alignment with EU rules and regulations. That would get Brexit done and, most likely, eliminate the need for that border in the Irish Sea.

Philip Collins, political commentator with the London Times, points out that a Johnson majority will require Tory seats in unfamiliar constituencies. The Tories need to win in working-class, Leave-voting, areas of England and Wales. The only way they will be able to hold on to those seats in any future election will be to serve the economic interests of their new electorate.

A hard Brexit does not come close to meeting that test. Neither will a shift to Rees-Mogg style right-wing demagoguery. A thumping Tory majority will, potentially, allow Johnson to ignore his swivel-eyed loons.

New Tory voters in the forgotten North will be expecting money and jobs. That doesn’t fit with a Singapore-on-Thames (or Tyne) agenda. Cold political calculation could mean that Johnson dumps yet another another heap of promises. As cynical as it gets but that’s where we are. Johnson may be many things but he is not an ideologue: he doesn’t have an ideology.

A Tory victory requires a peculiar alliance of the much vaunted “left behind” and the rich. The latter always fear someone is going to take their money away from them. The poor want to believe that Johnson will do something for them. Perhaps this is the weirdest aspect of Brexit. The only way this particular circle can be squared will be via a surge of public-sector spending without an accompanying rise in taxation.

That might be another message being hammered home by those Tory handlers: Donald Trump has presided over many things, including a complete loss of fiscal discipline. Trillion-dollar deficits at a time of full employment do not matter. At least not yet. If there is a plan it could well be based on Trumpist economic policy, as well as lies.

If promises mean anything, we are heading for a reprise of the Brexit torture. If Johnson implements Brexit as promised, the resulting border in the Irish Sea takes enormous risks with the stability of the union. There will either be a comprehensive trade deal with the EU or the United States, not both as promised.

I’d bet that the promises mean nothing at all. At least one group, either hard Brexiteers, the left behind or the rich, are going to be very disappointed.