Theresa May or Andrea Leadsom to be next UK prime minister 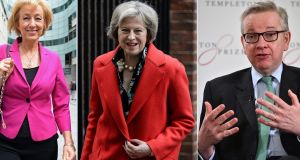 Andrea Leadsom (left) and Theresa May will square off to be the next Conservative Party leader after Michael Gove was eliminated. Images: AFP/Getty Images.

Britain is destined to have its first woman prime minister since Margaret Thatcher, after Conservative MPs chose Theresa May and Andrea Leadsom as the final candidates for their party’s leadership. Ms May, who has been home secretary for six years, won 199 votes and Ms Leadsom, an energy minister, won 84. The third candidate, justice minister Michael Gove, who won 46 votes, was eliminated.

Ms May, who opposed Brexit in last month’s referendum, and Ms Leadsom, who campaigned to leave the EU, will now compete for the votes of about 150,000 Conservative party members. Ms May, who won the support of more than 60 per cent of Conservative MPs, said she would argue that she is the best leader to unite the party.

“Because we need strong, proven leadership to negotiate the best deal for Britain as we leave the European Union, to unite our party and our country, and to make Britain a country that works not for a privileged few but for every one of us,” she said.

“Those are the things my colleagues have voted for in overwhelming numbers today, and I am confident they will win the support of our members –and the support of the country as a whole.”

Ms May has the support of a number of prominent Leave campaigners, as well as many cabinet colleagues who campaigned for Remain. Ms Leadsom has faced questions about her professional background in financial services, her tax arrangements and the sincerity of her support for Brexit.

But she has the support of many Leave campaigners, who have argued that the next prime minister should have campaigned for Britain to leave the EU. Former London mayor Boris Johnson, who withdrew from the leadership contest last week, said that Ms Leadsom had recorded a “stunning achievement” in securing a place on the shortlist.

“She is now well placed to win and replace the absurd gloom in some quarters with a positive, confident and optimistic approach, not just to Europe, but to government all round,” he said.

Mr Gove, who abandoned Mr Johnson three hours before nominations closed to launch his own leadership bid, did not immediately endorse either Ms May or Ms Leadsom. But he said he was pleased that Conservatives will choose between two women as their leader.

“It’s now up to the Conservative Party and indeed the wider country to assess the skills, the abilities and the leadership potential of these two candidates,” he said.

“I hope over the course of the next few weeks we will have an opportunity to have a debate about the direction in which the country should go, which will be civilised, inclusive, positive and optimistic.”

A YouGov poll of Conservative members this week showed Ms May well ahead but a survey by the ConservativeHome website gave Ms Leadsom a narrow lead. The new leader will be elected by postal ballot and should be in place by September 9th.