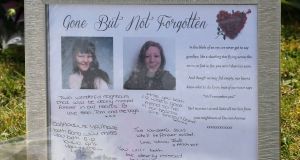 Tributes left outside a house in Spalding, Lincolnshire, where the bodies of Elizabeth Edwards and her daughter Katie (13) were found murdered. File photograph: Chris Radburn/PA Wire

Two 15-year-olds have been given life sentences, both with minimum terms of 20 years, at Nottingham Crown Court for the murders of a mother and daughter in Spalding, Lincolnshire, in April.

Elizabeth Edwards (49) and her daughter Katie (13) were smothered and stabbed through the throat by the teenage couple while they slept.

A five-day trial at Nottingham Crown Court heard that both killers were aged just 14 when they planned and carried out the killings “to the letter” at the victims’ home.

The jury previously heard the murder plot began as a grudge against the mother, a school dinner lady.

Prosecutor Peter Joyce QC said the teenagers shared a bath, had sex, and watched Twilight vampire films after the killings.

Offering mitigation before sentencing, defence QC Simon Myerson, representing the boy, said: “What he did was terrible. What the victims suffered was appalling.

“The reason these offences were committed was, as far as anyone can ascertain, the two children became trapped in a fantasy of their own devising.

“It’s inconceivable that had they been fully mature, had they not been subject of their own personality disorders, that these offences would have been committed by them.”

Sentencing the pair Mr Justice Haddon-Cave said: “This case is, in many respects, without parallel.”

The murders had been “brutal . . . almost in the form of an execution”, the judge said.

Speaking outside court, Karen Thompson, deputy chief crown prosecutor at CPS East Midlands, said: “This is one of the most distressing and disturbing cases that I have ever encountered.

“The male defendant accepted his guilt on the first day of trial. The other defendant maintained her not guilty plea but, after the jury heard all the medical evidence presented they concluded that any difficulties that she may have had did not prevent her forming an intent to kill.

“Our deepest sympathies are now with the extended family and friends of Elizabeth and Katie Edwards as they attempt to come to terms with this horrific crime.”