Still-life of Essex town defined as most Eurosceptic in country 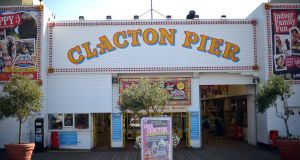 Clacton Pier in Clacton-on-Sea, southeast England: the town has become known variously as the most Eurosceptic in Britain and “Brexit-on-Sea”. Photograph: Carl Court/AFP/Getty Images 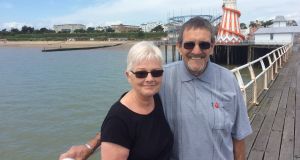 Elizabeth and David Coney: both are Labour voters and were part of a large section of the party support which resisted the endorsement of a Remain vote by Jeremy Corbyn.

It was for her daughter Essie’s future that Clare Whetlor decided six months ago to move to be with her family in Clacton-on-Sea, the seaside resort town on the Essex coast. “She’s two. Where we used to live, the majority of children did not speak English as a first language so we felt that would have an impact on her education,” Whetlor says, on the promenade beside Clacton pier.

Like a large majority in the area, she voted to leave the European Union in the referendum last Thursday, an unsurprising result considering Clacton has become known variously as the most Eurosceptic town in Britain and “Brexit-on-Sea”.

With an ageing population that is 95 per cent white and British, the town has the only elected Ukip MP in Douglas Carswell and 16 councillors from the party. The district of Tendring, where Clacton is located, returned a majority of just under 70 per cent to leave the EU last week.

On its wide wooden pier, the elderly residents mix with tourists to look out on the North Sea coast, in the area which is a popular retirement destination for people from east London. Founded as a seaside resort in 1871, the town has seen a drop in tourism as foreign holidays become more popular.

For many of those walking the boardwalk, the central issue in the referendum was immigration and what they perceive as overcrowding, which has led to pressures on services such as the National Health Service and housing.

“We can’t get into the local hospital because there is problems. My husband is not well and we have to go miles away to get this [procedure] done. I think it is the volume of people coming into the country,” Elizabeth Coney says. She and her husband David live in Dagenham in east London and voted Leave on Thursday.

“Don’t get me wrong, it is not to do with the immigrants. It is just the sheer volume of it. What we should have is more of a say in how many people come in and everything because our country is only tiny.”

Both Labour voters, the couple are part of a large section of the party support which resisted the endorsement of a Remain vote by Jeremy Corbyn.

“We voted Labour all of our lives and he just doesn’t give us any confidence,” says David Coney. The alternative? Michael Gove, the justice minister dubbed the brains behind the Leave campaign, was very impressive, Elizabeth says.

With 4 per cent of residents who are foreign-born – the British average is 8 per cent – Clacton’s concern about immigration appears indirectly proportional to the number in the area. The results from the referendum showed that in many cases, the areas showing the highest levels of immigration were least concerned about it and the strongest Leave areas had the fewest immigrants.

Maureen King, who has lived in Clacton for eight years, echoes the views of the Leave campaign, saying that an Australia-style points-based system should be used to judge who should be allowed into the country. “If they are going to come here . . . they should have a job to go to,” she says.

Having moved from London to the seaside town a year ago, Carly Hearn says she voted Leave, in part because her mother insisted on it. “By leaving the EU, we will be able to have tighter regulation on immigration. It has affected a lot of us work-wise.”

For others, the decision was about the sovereignty question. “It’s a step into the unknown but we will survive. Europe will want us before we need them,” says Darren Nugent from Doncaster, on a day trip to Clacton.

“The UK will once again be able to control its borders and the turmoil of the markets will eventually calm,” he adds. “We wanted our voice to be heard.”

Although the claims made by both sides in the referendum have since been attacked for their veracity, especially the much-ridiculed figure of £350 million being sent to the EU every week, many of the voters still believe them.

“I can’t understand why we pay £350 million a week to be in it and also if anything happens in this country – floods and that – they [British services] don’t get any money,” says Robert Curtis, on holiday from Norfolk.

Luke Morris (19) works in a local hotel and could not vote as he had recently moved address, but he says the contributions Britain makes would be better used at home. “I know they lied about the NHS getting it all but I think it will help us more having it for ourselves.”