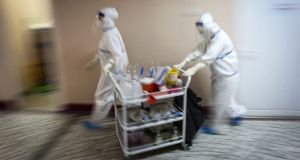 The European Union has decided to drop Serbia and Montenegro from its safe list of countries from which non-essential travel is allowed, and did not even discuss including the United States given its sharp rise in coronavirus cases, EU officials said.

The listing is only a recommendation; not all of the 27 EU member countries are applying its provisions.

EU countries also discussed dropping Algeria and Morocco from the safe list due to a rise in Covid-19 cases but most opposed the move as numbers there were still relatively low. The two North African countries are therefore set to remain on the safe list for the moment. The list is updated regularly.

France, the main proponent of Algeria’s removal from the list, said at the diplomats’ meeting it would adopt national measures to block arrivals from the North African state, according to an EU official who attended the meeting.

Despite China being on the list, travel from there will be allowed only if Chinese authorities also allow in EU visitors. The reciprocity requirement is not applied in the case of the other listed countries.

“China has no intention to open its borders to the EU,” an EU diplomat said with respect to discussions with Beijing.

At a meeting on Monday, Luxembourg and Cyprus supported adding the United Arab Emirates to the safe list based on data provided by Cyprus, but other countries opposed it, officials said.

Meanwhile, Australian states on Tuesday tightened restrictions on movement as authorities struggle to contain a fresh outbreak of Covid-19 in the country’s southeast that has pushed the national tally of cases beyond 10,000.

With growing fears of a second coronavirus wave nationally, two states extended border restrictions and Australia’s most populous state imposed limits on the number of people allowed in large pubs.

The changes come as scores of new cases were uncovered in Victoria, the country’s Covid-19 hotspot, despite a return to lockdown last week for nearly five million people in state capital Melbourne. Active cases in the state rose to nearly 2,000 after another 270 infections were detected in the past 24 hours, authorities said, taking Australia’s total number of cases to about 10,000.

Australia’s death toll hit 110 on Tuesday after two people in their 80s died from the virus in Victoria.

“We haven’t turned the corner yet. I hope to see that this week, but there are no guarantees,” Brett Sutton, Victoria’s chief medical officer, told reporters in Melbourne.

Australia avoided the high Covid-19 casualty numbers of other nations with swift and strict measures, but a spike in community-transmitted cases in Victoria and a rise in new cases in New South Wales has worried other states.