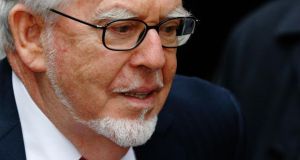 Entertainer Rolf Harris arrives at Southwark Crown Court in London yesterday. He is charged with 12 counts of indecent assault, and denies the charges. Photograph: Luke MacGregor/Reuters

A mainstay of family TV entertainment for decades, Mr Harris is charged with 12 counts of indecent assault against four girls, some as young as seven or eight, between 1968 and 1986. Seven of the counts relate to one woman.

Mr Harris, who denies all the charges, told the jury on Tuesday he had been in a relationship with the woman, but that this had started when she was 18, not 13, and that it had been an adult and consensual affair.

“This was not a consensual relationship, this was child abuse. Grooming. You effectively psychologically dominated that girl,” prosecutor Sasha Wass said, addressing the 84-year- old, in the dock at London’s Southwark Crown Court.

“It just never happened,” Mr Harris replied. Yesterday was his second day of evidence and first day of cross-examination. Wearing a dark pinstriped suit and red tie, he attended the indecent assault trial – now in its fourth week – with his wife.

“Yesterday you delighted us with a demonstration of your many talents,” Ms Wass said.

“The prosecution does not suggest for a moment that you are anything but a brilliant and polished performer. But this case, as you know, is not a talent show. This case is taking place to decide whether beneath your friendly, lovable exterior there is a darker side lurking.”

Mr Harris said the relationship had been a series of isolated incidents and purely sexual.

The woman had previously told the court Mr Harris abused her throughout her teenage and young adult life. On one occasion he molested her within yards of his sunbathing wife and daughter, and performed oral sex on her in the same room as other sleeping children, the jury of six men and six women was told.

Mr Harris denied that account. “If it wasn’t so serious that would be laughable,” he said.

“It’s a syndrome, isn’t it, child abuse?” said Ms Wass. “Grooming in the context of child abuse is training a child to keep your secret . . . The longer the abuse goes on, the more compliant the victim is.”

“I’m no expert in these matters,” replied Mr Harris.

Ms Wass said that even as an adult, the woman had been too intimidated by his fame to tell police. Mr Harris said when he was presenting the BBC show Animal Hospital the woman tried to blackmail him for £25,000. When he refused to pay she threatened to tell her story to the press, he added.

“I would not hold it in such dread for all these years unless she said it to me,” he said.

“The dread, I suggest, is that you were going to be exposed as a child molester,” Ms Wass replied.