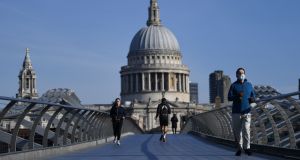 A jogger wears a mask as he runs along Millennium Bridge in London. Photograph: Daniel Leal-Olivas/AFP via Getty Images

It was the day after Boris Johnson told us all to stay at home, and the loveliest London has seen so far this year. There were few cars on the streets and buses rolled past empty but there were plenty of people outdoors – walking alone or in pairs, running, cycling or just sitting in the sun.

Many families were making the most of it, with one father patiently teaching his daughter to ride her bike on the pavement and a mother singing a Take That song to her son, to his embarrassed delight.

Most of the walkers kept their distance and the policeman checking up on a grocery shop in Chelsea was pleased with how things were going.

“People are listening, they really are,” he said.

The lockdown is popular, with a YouGov poll this week showing 93 per cent approve of the restrictions on movement. The shift in the government’s approach to the coronavirus from a strategy of mitigation to one of suppression has brought it into line with the international mainstream.

It seems to have eased public anxiety a little too, as have the ambitious economic measures to protect businesses, jobs and incomes. Chancellor Rishi Sunak on Thursday offered some protection to the self-employed, a group that was left out of the package of supports announced last week.

Sunak’s actions, including hundreds of billions of pounds in loans and grants, a promise to pay 80 per cent of the national wage bill and the temporary nationalisation of the railways are popular – although not universally so.

Admiring the magnolia trees on St Leonard’s Terrace near the Royal Hospital, I saw one of my neighbours approaching in a brisk stride. Dressed in Barbour, brogues, cords, Tattersall shirt and round neck jumper, like a member of Chelsea’s equivalent of the Georgian State Dance Company in full traditional costume, he was outraged at the government’s profligacy.

“I’m less worried about my health than I am about the economy,” he said.

Stockpiling food is out of fashion after last week’s ugly scenes of panic buying, which is now almost impossible thanks to social distancing and rationing in supermarkets. Social distancing queues limit the number of people inside supermarkets and shoppers in Sainsbury’s are not allowed to buy more than three of any item or two of items in short supply.

There are still shortages and items including coffee and eggs have been hard to come by this week, so friends have been alerting one another when a shop gets new stock in.

Over the weekend, rapacious shoppers were supplanted as the chief targets of public opprobrium by young people enjoying themselves in the park. At the beginning of this week, Sports Direct boss Mike Ashley and Wetherspoons owner Tim Martin were vying for the title of Worst Person in Britain because of how they were treating their staff following the lockdown.

But public outrage is now chiefly focused on runners and joggers who have been panting along pavements and in parks, refusing to get out of the way for pedestrians in case they lose half a second off their “time”. Alert citizens are fighting back by sticking an arm out in front of them to halt their progress.

Runners aside, Britain has reconnected with its sense of community in recent days with half a million people volunteering to help the NHS by driving patients and goods, shopping for vulnerable people who are self-isolating and keeping in touch with those who are lonely.

Jeremy Corbyn caught the mood on Wednesday during his last appearance in parliament as Labour leader when he said the crisis had shown how important it was to value one another.

“We can all now see that jobs that are never celebrated are absolutely essential to keep our society going. Think of the refuse workers, the supermarket shelf stackers, the delivery drivers, the cleaners, those grades of work are often dismissed as low skilled,” he said.

“But I ask them this question, who are we least able to do without in a crisis? The refuse collector or the billionaire hedge fund manager? Who is actually doing more for our society at this very moment?”

Boris Johnson spoke this week about the state “putting its arms around” people to cushion the impact of the crisis. But the millions staying at home, missing out on meeting their friends and elderly relatives are, in the words of a John Ashbery poem, “the light from the lighthouse that protects as it pushes away”.