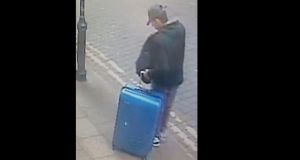 Detectives from the northwest counter-terror unit say they know Salman Abedi visited the Wilmslow Road area of Manchester, known locally as the Curry Mile, and was seen with the suitcase in the city centre.

They are trying to piece together his movements from May 18th, when he arrived back in the UK from Libya, and May 22nd, when he detonated a bomb, killing 22 people and injuring 116 others.

DCS Russ Jackson from the counter-terrorism unit appealed for information.

He said: “We continue to track the final movements of Salman Abedi and are particularly interested in his whereabouts between 18 and 22 May 2017.

“Today, we are releasing an image of Abedi carrying a distinctive blue suitcase and an image of a replica of the case . . .

“We believe Abedi was in possession of this case in the days before the attack at Manchester Arena on Monday 22 May. I want to stress that this is a different item than the one he used in the attack. This image was taken from CCTV in the city centre on 22 May.

“We have no reason to believe the case and its contents contain anything dangerous, but would ask people to be cautious.”

Earlier, detectives arrested the chief executive of a Libyan marketplace website and raided more houses in an effort to close in on the bomber’s network.

A 23-year-old man – understood to be Ala Zakry, who runs Hasoub Alafak, a UK-registered online marketplace based in Tripoli – was arrested in the Sussex town of Shoreham-by-Sea, about 265 miles away from the scene of the last week’s attack.

Houses in Whalley Range, Greater Manchester and Chester, in Cheshire, were also searched overnight by counter-terrorism detectives. Police officers are also searching a landfill site in Pilsworth, near Bury. A total of 14 men remain in custody.

On Monday Greater Manchester police said a 23-year-old man in Shoreham-by-Sea, Sussex, had been arrested on suspicion of offences contrary to the Terrorism Act.

Police officers stood guard outside Mr Zakry’s flat in Brunswick Road, which is above two shops, a clothing boutique and a hairdresser, in the seaside town.

Mr Zakry is also a digital marketing specialist, and a trainee pilot, according to his social media profile.

A colleague in Tripoli said she had spoken to Mr Zakry on Sunday but could not contact him on Monday. She said his family lived in Libya, although he had an aunt in the UK. The company mainly serves Libyan customers and its work involves purchasing products from websites such as Amazon and importing them to Libya for customers.

Violet Mainda, who owns the hairdresser beneath Mr Zakry’s flat, said she would be “shocked” if Mr Zakry was connected to the Manchester bombing. “He is a very nice boy,” she said.

MI5 has launched two urgent inquiries into how it missed the danger posed by Abedi amid claims his interest in being a potential terrorist killer was repeatedly reported to the authorities.

Britain’s domestic security service started one review last week, which will aim to quickly identify any glaring errors, while the other will be more in depth, according to the Guardian.

Abedi is understood to have been on a list of 20,000 individuals said to have been considered “subjects of interest” to security services in the past, but not among 3,000 suspects into which about 500 investigations are being conducted.

The former Liberal Democrat leader, Menzies Campbell, said there should be an independent parliamentary inquiry into the alleged missed opportunities to intercept Abedi.

Campbell was a member of the intelligence and security committee when in 2014 it published a report into the intelligence services’ handling of information about the two people who went on to murder the soldier, Lee Rigby, in May 2013.

Six children are among 19 people in critical care following the attack, NHS England said. Critical care means patients may be receiving help breathing or organ support but does not necessarily mean they are in a critical condition.

Fifty-two people are in hospitals around Greater Manchester, down from 116 immediately after the attack.

There were signs Manchester was returning to normal as it was announced Manchester Victoria station, which has been shut since the attack on May 22nd, will reopen from Tuesday – with Northern, TransPennine Express and Metrolink operating a full timetable of services.