London Letter: A lesser seen version of the German story 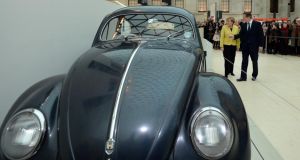 British prime minister David Cameron and German chancellor Angela Merkel view a 1953 Volkswagen, during their visit to the British Museum to attend “Germany: Memories of a Nation”. Photograph: EPA

Wrapped well against the cold, queues of people lined the street outside the British Museum on Wednesday to see an exhibition that features a porcelain rhinoceros, some drinking jugs, and maps, lots of maps.

Germany: Memories of a Nation, curated by museum director Neil MacGregor, finishes today after a three-month run. It has been one of the most quietly influential of all of the museum’s displays.

Its glories are many: Hans Holbein’s Portrait of Erasmus; Tischbein’s Goethe; and one of just 48 surviving original copies of one of Europe’s earliest printed books, the 1455 Gutenberg Bible. It includes, too, the wood carving by the Wurzburg sculptor and carver Tilman Riemenschneider, that brought the four evangelists exquisitely to life on the eve of the Reformation.

A replica of the gates at Buchenwald concentration camp – just five miles from Weimar, which was home two centuries earlier to Goethe and Schiller – stands with its motto, “Jedem das Seine” (“To each his due”).

The gate’s design reflects the contradictions in German history: the horrors of the Nazi regime, but the beauties of the Bauhaus, the modernist movement that brought German visual culture back to life after the destruction of the first World War, merging traditional crafts, industrial design and art.

The exhibition includes, too, simple items that reveal absurdity: Grete Marks’s earthenware vase, denounced as “un-German” by Joseph Goebbels before Marks fled to Britain in the late 1930s.

For the British, Memories of a Nation has offered a rarely seen perspective on a country usually seen only in relation to two world wars and the Holocaust. It has concentrated on a changing Germany through the centuries, with its “fluid and porous” borders and even the multiplicity of coins used in the 1700s.

As Goethe wrote to Friedrich Schiller in Xenien in 1796: “Germany, where is it? I do not know where to find such a country.”

Maps and lithographic prints explore the ebbs and flows of borders, from the 1678 occupation of Alsace by the French to its reclamation by Germany in 1870. In one print, a strutting French cockerel faces the anger of the imperial eagle. Another, from two centuries later, joyously welcomes Alsace’s return.

There is much for German visitors too, because such an exhibition hosted in Berlin would have had to make greater play of the Nazi era.

Opening the exhibition last October, Germany’s culture minister, Monika Grütters, spoke of how “it might not always be very flattering to see oneself through the eyes of another, but it has great appeal. An outsider’s view can shine light on facets of one’s own identity that have fallen into obscurity. Being mirrored in the eyes of the other touches us emotionally if we sense the warm-hearted inquiry and genuine interest of a friend. That is how I felt just now.”

However, Memories of a Nation does not necessarily foretell a new era of British-German understanding. Too often, the relationship, especially now, has been one of mutual misunderstanding, perhaps even incomprehension. This will be obvious in the next couple of years if there is a British referendum on EU membership.

Germans living in Britain sigh at the presentation of their country, with its frequent well-meaning, if crass, “don’t mention the war” jokes and its assumption that Berlin is the not only the decision-maker in the EU, but the unquestioned one. For some London-based Germans, that sense of Germany as an untrammelled power holds dangers, particularly if the euro zone is thrown into crisis on Sunday by Greek voters – a crisis, they believe, Germany will be wrongly blamed for.

However, perceptions are often wrong, as illustrated in Memories of a Nation by Albrecht Dürer’s 16th-century anatomically inaccurate woodcut of a rhinoceros, as well as the porcelain sculpture it inspired two centuries later.

The queues in Bloomsbury are, perhaps, proof that some Britons have been persuaded to look beyond caricature. As, too, may be the fact that British visitors spent more than three million days in Germany in the first nine months of last year, a rise of nearly 4 per cent. The exhibition will, the German Tourist Board hopes, “stimulate people’s curiosity about Germany further”.

On Tuesday, MacGregor was awarded the Commander’s Cross of the Order of Merit of the Federal Republic of Germany, in recognition of his “remarkable passion” for German arts and culture.

However, culture is not, perhaps, the most important factor. For others, to quote one London-based German correspondent, the relationship may be influenced most by cheap Easyjet flights to Berlin, the happening place in Europe for stag weekends, “rather than by Erasmus”.