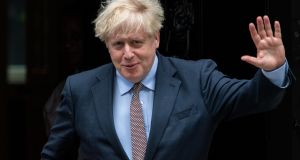 Boris Johnson was so frustrated at prime minister’s questions by Keir Starmer’s failure to ask about his plan to break international law that he reproached the Labour leader for focusing on coronavirus instead.

“He is totally silent on the bill that obsesses the rest of his backbenchers. He is totally silent. A great ox once again has stood on his tongue. He has nothing at all to say about that subject today, because he does not want to offend the huge number of his backbenchers who want to overturn the verdict of the people and take us back into the EU, which is of course what he wants to do himself,” he said.

The UK Internal Market Bill, which was published on Wednesday, leaves no doubt about its purpose in overturning parts of the Brexit withdrawal agreement, stating explicitly that its provisions should have effect even if they are inconsistent with domestic or international law.

The government’s chief legal adviser Jonathan Jones resigned rather than endorse its law-breaking and two of Johnson’s Conservative predecessors, Theresa May and John Major, warned that it will undermine Britain’s capacity to conclude international agreements.

Downing Street’s spin on the legislation has shifted a number of times since news of it was leaked on Sunday night, suggesting at first that it was no more than a tidying-up exercise. Now No 10 is blaming the haste with which the withdrawal agreement and the Northern Ireland protocol were negotiated as Johnson’s self-imposed deadline loomed.

“In the general election it was, according to the PM, ‘oven ready’. Now, when they want to jettison it in breach of international law, it was ‘signed in a rush’. What a bunch of incompetent and unscrupulous chancers – and they are trashing the UK’s international reputation,” Nicola Sturgeon said on Wednesday.

The number of Conservative MPs unhappy with the legislation is more than a handful but far fewer than the 56 needed to defeat it if the DUP’s eight MPs vote with the government. But the devolved legislatures in Scotland, Wales and Northern Ireland will not give their consent.

Those legislatures cannot block the Bill but the House of Lords can amend it to remove the clauses that override the withdrawal agreement. If the Commons rejects the amendments, the Bill returns to the Lords where it could be delayed well beyond the end of this year.

According to parliamentary convention, the Lords do not delay legislation that give effect to a governing party’s manifesto promises. With this bill, the reverse is the case as the government is seeking to overturn parts of the withdrawal agreement it won an election promising to implement.