Irish citizens in Britain to retain rights after Brexit

Irish abroad will be protected under the Common Travel Area, British government confirms 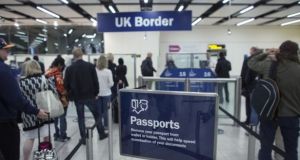 ‘If you are an Irish citizen you would continue to have the right to enter and remain in the UK, as now’. Photograph: Oli Scarff/Getty Images

Irish citizens in Britain will continue to enjoy all their current rights under the Common Travel Area (CTA), the British government has confirmed.

A “technical notice” on the impact of a no-deal Brexit on the Common Travel Area, one of 28 published on Thursday, says Britain will update legislation if necessary to make sure that nothing changes.

“If you are an Irish citizen you would continue to have the right to enter and remain in the UK, as now. You are not required to do anything to protect your status,” it says. “In addition, you would continue to enjoy the reciprocal rights associated with the CTA in the same way that British citizens in Ireland would if there is no deal. These rights include the right to work, study and vote, access to social welfare benefits and health services. Where required domestic legislation and agreements would be updated to ensure that the CTA rights continue to have a clear legal basis.”

Established in the 1920s, the Common Travel Area allows British and Irish citizens to move freely and live in one another’s countries. Although it is recognised in EU treaty protocols, it is based on domestic legislation in Britain and Ireland which offer one another’s citizens greater rights than immigrants from elsewhere.

The technical notice issued by the Department for Exiting the European Union confirms that all associated rights will be protected even if Britain leaves the EU without a deal.

“Irish citizens in the UK and British citizens in Ireland will continue to enjoy the same associated rights and entitlements to public services, including access to employment, healthcare, education, social welfare and benefits, as well as the right to vote in certain elections.”

Britain’s negotiations with the EU are deadlocked over how to ensure that the Border remains open after Brexit but the technical notice stresses that the issue of the Common Travel Area is entirely separate and will not be affected by the outcome of the negotiations.

“The CTA holds special importance to people in their daily lives: it goes to the heart of the relationship between these islands. The UK government is firmly committed to maintaining the CTA arrangements after the UK leaves the EU, an objective shared by the Crown Dependencies.

“The Irish Government has been clear also in its commitment to the continuation of the CTA. The CTA has proven to be resilient over the years and would continue to endure if there is no deal,” it says.