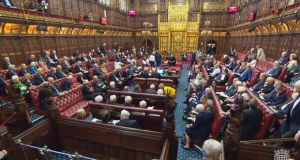 Peers voted by 335 votes to 244 in favour of an amendment to the EU Withdrawal Bill despite government warnings that the vote would put Britain at a disadvantage in negotiations with the EU. File photograph: PA Wire

Theresa May’s government has suffered a major defeat on Brexit in the House of Lords, which voted to allow parliament to reject a withdrawal agreement without triggering an exit from the European Union with no deal. Peers voted by 335 votes to 244 in favour of an amendment to the EU Withdrawal Bill despite government warnings that the vote would put Britain at a disadvantage in negotiations with the EU.

“We are disappointed that the House of Lords has voted for this amendment in spite of the assurances we have provided,” Minister of state at the Brexit department Martin Callanan said after the vote.

“What this amendment would do is weaken the UK’s hand in our negotiations with the EU by giving parliament unprecedented powers to instruct the government to do anything with regard to the negotiations – including trying to keep the UK in the EU indefinitely.”

The amendment, which will be considered by MPs when the Bill returns to the House of Commons, says the government can only conclude a withdrawal agreement if it has been approved in draft form by both houses of parliament. Such a vote should take place before the agreement is debated in the European Parliament, which must ratify any Brexit deal.

Crucially, it gives parliament the authority to determine the government’s negotiating mandate, declaring that the government “must follow any direction in relation to the negotiations under Article 50(2) of the Treaty on European Union which has been approved by a resolution of the House of Commons, and subject to the consideration of a motion in the House of Lords”.

Labour’s shadow Brexit secretary Keir Starmer described the Lords’ vote as “a hugely significant moment” in the fight for parliament’s role in the Brexit negotiations and in avoiding a no-deal exit.

“Labour won the argument at the end of last year for parliament to be given a meaningful vote on the terms of our withdrawal from the EU. And we are clear that it must be just that: a meaningful vote. If parliament votes down the article 50 deal, then parliament must decide what happens next. Under no circumstances can the prime minister be given a blank cheque to crash the UK out of the EU without a deal. I would urge the prime minister to accept this cross-party amendment and recognise that there is no majority in parliament or the country for a no-deal Brexit,” he said.

Twelve Conservative MPs joined Labour, the Scottish National Party and other opposition parties last December to defy the government by giving parliament a “meaningful vote” on the final Brexit deal. The government has promised to give MPs a vote but has insisted until now that a vote to reject the withdrawal agreement would lead to Britain leaving the EU with no deal at all.