Quiet gathering meant an awful lot to all concerned 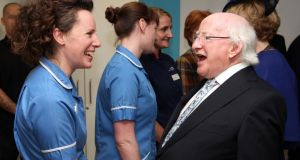 The glittering investiture of Ireland into The Order of the VBF (Very Best Friend) continues. There’s nothing like some rousing pageantry to stir emotion and stimulate feelings of intense national pride. That’s what it should do, if it’s any good.

And the British are brilliant at it.

There has been no shortage of welling up and blinking back as Michael D Higgins does the rounds in this lavishly crafted regal, military and civic production.

Even the London mayor did his duty at City Hall yesterday – box office Boris had a chummy welcome for Michael D and Tánaiste Eamon Gilmore, a daft smile for the cameras and the Tower of London to exploit for a backdrop.

But then – Windsor Castle, the Houses of Parliament, Westminster Abbey and the London Guildhall – all the locations have been impressive.

The queen even lent Buckingham Palace to the President yesterday so he had somewhere handy to meet the deputy prime minister before changing into his evening wear for a banquet up the road.

Earlier in the day, David Cameron had him in to Number 10 for the bit of lunch and a cup of tea in his hand.

Because this is a state visit, Michael D travels with two entourages, known as “suites” because these rare visits have a language all of their own. The people who work for Buckingham Palace take pleasure in flaunting their fluency. Both suites have lots of highly strung people carrying lists.

Michael D’s suite includes the Tánaiste and his wife, Carol Hanney, and a few likely-lads-in-waiting known as advisers back home. Ireland’s top civil servant Martin Fraser is part of the posse, along with our Ambassador to London Dan Mulhall and David Cooney, secretary general of the Department of Foreign Affairs.


Entourage
The second entourage is the British suite. We didn’t recognise any of them, but there was a man in an extravagant naval dress uniform and a lady in fuchsia pink with sensible shoes, a purposeful handbag and a hat. She turned out to be a very senior lady-in-waiting called the Hon Mary Morrison.

She was getting on like a palace on fire with another woman in a fabulous hat – Oscar-winning Irish costume designer Joan Bergin, occasional unofficial lady-in-waiting to Sabina Higgins when the occasion demands.

Joan, it must be said, in concert with Sabina, is playing a fashion blinder this week.

Yes, these occasions are designed to be irresistible – with massive green white and orange floral arrangements thrown in.

Tuesday night – her majesty, dripping with emeralds the size of gobstoppers and Sabina wearing a blue/green crystal-encrusted gown designed to reflect the Connemara landscape.

And there’s Enda Kenny and Eamon Gilmore, stuffed into white tie and tails.

All week, experts on Anglo-Irish history rampaging through the television and radio studios of two countries, knocking economists senseless as they rush towards the context.

You see, it’s easy to get lost in the excitement and colour. But the most valuable, genuine and touching part of The Investiture of Ireland into The Order of the VBF (Very Best Friend) came yesterday morning at a hospital in London.

The President visited Irish NHS workers at University College Hospital and also met a group of six retired nurses from Ireland who worked for most of their lives in England.

This was a heartwarming event and it seemed to touch everyone in the room. But it touched the Irish people much deeper and you could see by the President and Sabina’s reaction that this small, quiet gathering meant an awful lot to all concerned.

These workers, skilled and sought after in hospitals around the world, turned out with great pride and no small excitement to greet their President.

Bernadette Porter from Raphoe in Co Donegal proudly wore on her uniform the MBE she got from Prince Charles in Buckingham Palace this year for her great work in the area of multiple sclerosis.

“It’s the first time I’ve worn it in public” said Bernadette, who is 25 years in London.

The President’s visit was “fantastic” and had lifted the spirits of her Irish co-workers “and given them a sense of pride and identity”.

Then there was consultant obstetrician from Cork, Pat O’Brien. He delivered Cork woman Angie Benhaffef’s conjoined twins at University College Hospital four years ago and pointed out that almost all of his key team came from Ireland.

The oldest woman in the room was 95-year-old Mary Talbot, originally from Athenry in Co Galway, who came to Margate to nurse in 1938, married a bookie’s son who made propellers for jets in the second World War and gave up nursing when her children came.


‘Fantastic’
Mary still has her Galway accent. “I can’t change it – it comes naturally to me.”

She’s delighted with the President’s visit. “I met him before in the Irish centre – he’s very nice. But this is fantastic - one of the best things that ever happened and I’m really delighted. I think it might bring us closer together.”

Then she paused, reflecting on her years in England. “But we are closer, anyway. But I’m very pleased they [the President and the queen] are getting together – it’s a pity they didn’t do it a bit earlier.”

Bridie Brennan, who grew up near Castlebar, came to England in the late 1950s and met her late husband in Birmingham. She says their 48-year-old son “is as Irish as I am”.

Bridie reflects on the visit from Michael D. “I think it’s the most wonderful thing to happen, because he has given something that we’ve desired for a long time and that’s the truth. He makes us proud to be ourselves and he has given us recognition. For people our age, and for what we did when we were working, especially the men.”

The President shook hands with the doctors and many nurses. They had Irish faces. Fine professionals and all so happy and honoured, to the extent that some were moved to tears, by the fact that their head of state had come to value them and their work.

Some of the younger nurses and doctors said they hoped to get home, but there were only short-term contracts on offer. There was no steady work to keep them in Ireland. You could sense their regret.

Matron Paula O’Brien from Roundstone in Connemara only intended to stay a short while in England, but that was 17 years ago. She is building a house now back in Galway. “If you work hard and have ambitions you will do well here.”

Sir Robert Naylor, UCLH chief executive, surveyed the scene. “I’ve been here at University Hospital for 14 years and I’m amazed by the enthusiasm of our Irish staff and their great sense of pride in this wonderful occasion.”

President Higgins had hugs for the hugely proud and delighted retired nurses, who stood up tall and bade him welcome, tears in their eyes. And he had applause, and then some more, for the men and women who give so much to their adopted country but still love their native land.

And that was the real lump in the throat moment. Not anything prompted by pageant or ritual. Just a pride, a deep sadness and yes, a feeling of anger that these wonderful people are not back home doing what they do.

If this week’s visit is more than good enough for them, then it’s the best for us too.