He was calling me ‘mate’. I felt the blood rush up through my chest

London Letter: For some, the idea of Britain as a haven of tolerance and freedom prevails 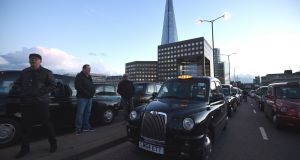 Once a London cabbie alights on the subject of Uber, Brexit or cycle lanes, the wisest course is to stop listening, look out the window and sink deep into your own thoughts. Photograph: Kirsty O’Connor/PA Wire

We were at the bottom of St James’s when the cab jolted and hissed to a halt, as a black SUV stopped in front, right in the middle of the street. A side door slid open and Prince Harry stepped out, wearing the same blue suit he announced his engagement in and with a close protection officer by his side as he bounded across to the pavement.

“Was that Prince Harry?” the driver said.

I told him it was.

I said it seemed unlikely.

“Prince Harry. In a bleeding Uber,” he said.

To pass the Knowledge, a series of tests to qualify them for a licence, London cabbies must memorise 20,000 landmarks, 25,000 streets and 320 routes. And just three topics of conversation: Uber, cycle lanes and Brexit.

Once they alight on one of these subjects, the wisest course is to stop listening, look out the window and sink deep into your own thoughts. I had almost forgotten about the driver altogether when I noticed that he was calling me “mate”.

I felt the blood rushing up through my chest and into my head as my eyes flashed and stung. Mate. It’s not the insolence or the cheerless familiarity of it, so much as the hint of laddish menace.

After five years, Markle can win indefinite leave to remain in Britain and apply for citizenship, a process that includes a multiple-choice test on life in the UK

It’s the sound of getting taken down a peg or two, of home truths being delivered, it’s the bouncer on the door, the hooligan on the terrace, it’s a pint glass smashing in the street at midnight. It’s the Black and Tans burning down Cork.

I decided to let it go.

Instead, as the stout, 19th century pillars of Pall Mall moved past in the gathering dusk outside, I thought about Meghan Markle. Apart from all the usual preparations for a wedding, she has to get baptised and confirmed in the Church of England and begin the process of becoming a British citizen.

The first step is to apply for a fiancé or spouse visa, which involves proving that her relationship with Harry is real and that they have enough money to support themselves. After five years, Markle can win indefinite leave to remain in Britain and apply for citizenship, a process that includes a multiple-choice test on life in the UK.

The palace says that Markle will be subject to the same rules as every other applicant and in one respect at least, she is in the same position as most Europeans I know who have become British citizens since the Brexit referendum – she’s doing it because she has to. When I asked one old friend, a German doctor who has lived and worked in Britain for 20 years, what he felt when he became a UK citizen, he said he felt annoyed – and a few thousand pounds poorer.

Because it’s so small, everyone has to be kind. They have to get on and make things work

A few days later, I was sitting on a narrow bench at a wooden table above an earth floor in south London. Hand-drawn signs pointed to Sudan, Afghanistan, Libya, Syria and the other troubled places that have driven refugees to Europe.

This was The Jungle, a play by Joe Murphy and Joe Robinson set in the refugee camp near Calais that was closed down just over a year ago. For Theresa May and Emmanuel Macron, the desperate people in Calais are above all a problem to be contained or dispersed.

Here, however, most of them emerge as resourceful and brave, even if a few are brutal and exploitative. Above all, they are driven by an idea of Britain as a haven of tolerance and freedom. Boxer, a washed-up drunk from the north-east of England who is among the clueless British volunteers who come to help the refugees, tells a little girl what she can expect when she makes it across the Channel.

“Has anyone ever told you about England? Because it’s a land full of green fields and great, long rivers. Tiny island out on its own. And because it’s so small, everyone has to be kind. They have to get on and make things work,” he says.