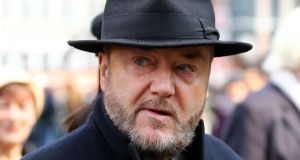 Former Bradford West MP George Galloway. Mr Galloway has tweeted that he is to launch a legal challenge to his loss in the UK general election. Photograph: Gareth Fuller/PA Wire

Former UK MP George Galloway has signalled that he is starting a legal challenge against his defeat in last week’s general election.

Mr Galloway won the Bradford West seat for his Respect party in a by-election in 2012, but he was defeated by Labour’s Naz Shah in last week’s vote.

Ms Shah secured a majority of more than 11,000 votes following a bitter campaign.

Last night, Mr Galloway said on Twitter: “We’ve begun legal proceedings seeking to have result of the Bfd West election set aside. I cannot therefor [sic] discuss my own election for now.”

His spokesman said the legal action was at an early stage but involved a complaint under section 106 of the Representation of the People Act 1983. This relates to candidates making false statements during campaigns.

The Bradford West contest was dogged by claims and counter-claims between Labour and Respect over a number of issues - especially relating to Ms Shah’s family background.

Last night, a Labour spokesman said: “This is pathetic and without any foundation.

“George Galloway should accept he was booted out by the people of Bradford West. They saw through his divisive politics and made a positive choice, by a majority of well over 11,000, to elect a brilliant new MP, Naz Shah.”

Mr Galloway first entered parliament in 1987 as a Labour MP, but was expelled from the party in 2003 after being critical of then leader Tony Blair over military action in Iraq.

He successfully stood against Labour MP Oona King in Bethnal Green and Bow in the 2005 general election, overturning a 10,000 majority with a campaign aimed at the east London constituency’s Bangladeshi community.

He lost the seat in 2010, only to make an even more remarkable comeback two years later, taking Bradford West from Labour in a by-election, after again targeting the seat’s largely Asian and Muslim communities.

Mr Galloway was reported to police on Thursday after he sent a tweet about exit polls before voting closed, which is banned under election law.

In a statement last night, Mr Galloway said: “It has come to my notice that there has been widespread malpractice in this election, particularly over postal voting.

“We are in the process of compiling the information which will form part of our petition to have the result set aside.”

Mr Galloway said he had added more information to his complaints under the Representation of the People Act concerning alleged “false statements made with the intention of affecting the result of an election”.