Alliance MP Stephen Farry made his first remarks in the House of Commons in Irish, the previous opening remarks in Irish was in 1901. Video: UK Parliament 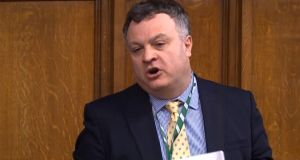 Alliance’s new MP for North Down Stephen Farry said he wanted his first formal comments in the House of Commons to be in Irish “to reflect the shared heritage of the language across all the traditions in Northern Ireland”. Photograph: HO/PRU/AFP via Getty Images

In his 36 years as a Conservative MP, Roger Gale has been called any number of things, branded a bigot for his opposition to same-sex marriage and a misogynist for referring to his female staff as “girls”. But it is safe to say that until Friday, he had never been addressed as Leas-Cheann Comhairle.

As acting deputy speaker, Gale was in the chair when Alliance’s new MP for North Down Stephen Farry rose to make his maiden speech.

“I wanted my first formal comments in this chamber to be in Irish to reflect the shared heritage of the language across all the traditions in Northern Ireland.”

The DUP’s Gregory Campbell was not in the chamber to hear Farry’s words, which were almost identical to those that drove the East Londonderry MP in 2014 to open a speech to the Northern Ireland Assembly with the words “Curry my yoghurt can coca coalyer”.

Farry acknowledged the differences among the parties from Northern Ireland who take their seats at Westminster but suggested that the DUP, the SDLP and Alliance could work together in response to Boris Johnson’s Brexit deal.

“Together we have a reasonable argument and we speak with a moral authority about trying to mitigate the impact of that boundary down the Irish Sea. At the very least, we would ask that the prime minister and government meet us halfway in that regard,” he said.

Maiden speeches in the House of Commons are by convention heard in silence and without interruption, something the SDLP’s Claire Hanna noted as she began hers.

“I anticipated having a wee bit more time to craft my maiden speech and to reflect our outlook. But, put simply, Brexit is an emergency and I was elected to do all I can to mitigate the impact of Brexit for the people I represent. Also, as a Northern Irish politician and a mum of three, the opportunity to speak for five minutes uninterrupted was too exciting,” she said.

The DUP’s Jeffrey Donaldson urged the prime minister to find a way to ensure that trade between Northern Ireland and the rest of the UK could be “unfettered”, as the withdrawal agreement promises, despite different regulatory and customs arrangements.