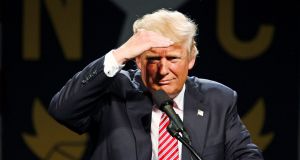 The people of Doonbeg have shown support for Donald Trump’s contentious plan to erect a €10 million rock barrier to save his golf links course from coastal erosion. File photograph: Jonathan Drake/Reuters

The people of Doonbeg have given a resounding “yes” to US billionaire Donald Trump’s contentious plan to erect a €10 million rock barrier to save his golf links course from coastal erosion.

Eleven local organisations and scores of locals have lodged submissions with Clare County Council backing Mr Trump’s plan for a 200,000 tonne, 2.8km rock barrier application, which, he says, is needed to save the golf course.

Seventy six of the 112 submissions made back the development, including 36 from locals, 15 from golf club members and 14 from non-locals. Apart from one objection from a local man, all of the opposition to the rock barrier is from outside Doonbeg.

Thirty two people from other parts of Clare and Limerick, Dublin, Kerry, Tipperary and Sligo have objected, including the Irish Surfing Association, the Lahinch-based West Coast Surf Club, Friends of the Irish Environment (FIE) and the recently-formed Save Doughmore Beach Protection Group.

A submission also came from Doonbeg Community Development Co, which represents the interests of the community and was instrumental in having the golf resort established in the late 1990s.

Its chairman, John O’Dea has warned the Council: “If the sea manages to breach the dunes at any of the vulnerable points, a huge amount of flooding is going to occur to the land adjacent to the dunes and is going to have a detrimental effect on the livelihoods of the householders and farming communities in the area.

“It is vital for our area that these works proceed to sustain the employment provided by the golf club and hotel which is essential to the life of our community in west Clare.”

Local couple, Michael and Ann Carrick live in a house just 100 metres from Doughmore Beach. They told the council the wall “will make our home and others in the area safer”.

The Irish Farmers Association (IFA) is in support. Clare IFA chairman, Willie Hanrahan said farmers have endured “considerable hardship over the years and will also benefit from the proposed development”.

Save Doughmore Beach Protection Group already has 3,800 people who have signed its petition against the project. “Tragically, this huge seawall, if given the go-ahead, will have this negative effect for countless generations,” says Sean O’Donoghue.

Green Party leader, Eamon Ryan TD, said the barrier poses “a real threat” to the sand dunes, pointing to research from a snail expert, Dr Evelyn Moorkens, into the impact it will have on a protected species, the Vertigo Angustior.