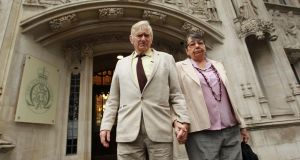 Peter Bull and his wife Hazelmary, the Christian guest house owners who were ordered to pay damages after turning away a gay couple, leaving court after losing their latest legal battle. Photograph: Sean Dempsey/PA Wire

Christian guest house owners who were ordered to pay damages after turning away a gay couple have lost a fight in the UK’s highest court.

Peter Bull (74) and his wife Hazelmary (69), had asked the Supreme Court to decide whether their decision to refuse to let Martyn Hall and his civil partner Steven Preddy stay in a double room constituted sex discrimination under equality legislation.

Five Supreme Court justices ruled against them today after analysing the case at a hearing in London in October.

The couple, who run a guest house in Marazion, Cornwall, had previously lost fights in a County Court and the Court of Appeal.

In 2011 a judge at Bristol County Court concluded that the Bulls acted unlawfully and ordered them to pay a total of £3,600 damages.

In 2012 the Court of Appeal dismissed an appeal by the Bulls following a hearing in London.

The couple had asked the Supreme Court to overrule the Court of Appeal.

The Bulls said they thought that any sex outside marriage was ”a sin” — and denied discriminating against Mr Hall and Mr Preddy.

They said their decision was founded on a ”religiously-informed judgment of conscience”.

Mr Hall and Mr Preddy said they were victims of discrimination.

Mrs Bull said after the ruling: “We are deeply disappointed and saddened by the outcome.”

Dismissing the appeal, Lady Hale, deputy president of the Supreme Court, said: “Sexual orientation is a core component of a person’s identity which requires fulfilment through relationships with others of the same orientation.”

Homosexuals “were long denied the possibility of fulfilling themselves through relationships with others”, she said, adding: “This was an affront to their dignity as human beings which our law has now (some would say belatedly) recognised.

“Homosexuals can enjoy the same freedom and the same relationships as any others. But we should not underestimate the continuing legacy of those centuries of discrimination, persecution even, which is still going on in many parts of the world.

“It is no doubt for that reason that Strasbourg requires ‘very weighty reasons’ to justify discrimination on grounds of sexual orientation.

“It is for that reason that we should be slow to accept that prohibiting hotel-keepers from discriminating against homosexuals is a disproportionate limitation on their right to manifest their religion.”

Christian Institute spokesman Mike Judge said: “What this case shows is that the powers of political correctness have reached all the way to the top of the judicial tree. So much so that even the Supreme Court dare not say anything against gay rights.

“Writing the main opinion in the ruling, Lady Hale effectively said gay rights are almost untouchable because of the rulings by European judges.

“Combine that with gay marriage, and it’s a recipe for all sorts of threats to people who believe in traditional marriage. This ruling is another slap in the face to Christians, and shows that the elite institutions are saturated with a liberal mindset which cares little about religious freedom.”

He added: “It should be noted that the one-sided laws which paved the way for this case, the Sexual Orientation Regulations 2007, were voted for by the now prime minister David Cameron.

“Parliament needs to reform the law to allow a more reasonable approach which balances competing rights. Otherwise, Christianity will become the belief that dare not speak its name.”

Mrs Bull, speaking outside the Supreme Court after the ruling was handed down, said: “Obviously, we are deeply disappointed and saddened by the outcome. “We are just ordinary Christians who believe in the importance of marriage as the union of one man and one woman.”

“Our B&B is not just our business, it’s our home. All we have ever tried to do is live according to our own values, under our own roof. These beliefs are not based on hostility to anyone - we certainly bear no ill will to Steven and Martyn. Our policy is based on our sincere beliefs about marriage.”

Mrs Bull said Britain “ought to be a country of freedom and tolerance, but it seems religious beliefs must play second fiddle to the new orthodoxy of political correctness”.

“We appealed to the Supreme Court to introduce a bit more balance when dealing with competing rights of sexual orientation and religious liberty. Somehow, we have got to find a way of allowing different beliefs to coexist in our society. “But the judges have sidestepped that big issue, and reinforced the notion that gay rights must trump everything else.

“In particular, we are deeply troubled by the remarks of Lady Hale, who says rulings by European judges means gay rights are almost untouchable.”

“What does this mean for other people in Britain who believe in traditional marriage - not just Christians, but Muslims, Jews, people of all faiths and none? “We ask Parliament to take a serious look at how Christians with traditional beliefs are being left out in the cold. “We have no regrets about contesting this case, nor will we ever be ashamed of our beliefs. “We are not perfect people, but we are trying to do our best to live out our faith with honesty and consistency. And we will continue to do that, come what may.”